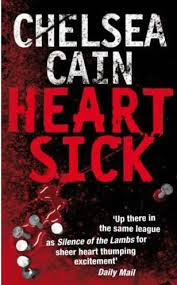 Another new author to me, another book my wife read and enjoyed, possibly a bit more than I did. Verdict good not great.

We have a series of abductions and murders of schoolgirls in Portland which sees Archie Sheridan called back to duty from sick leave. Archie is still recovering both physically and mentally from the aftermath of his previous case, which saw him captured and tortured by Gretchen Lowell – a serial killer, before she inexplicably saves his life and turns herself in. Sheridan is a walking pill-popping mobile pharmacy – shake him and I’m sure you would hear him rattle, such is the quantity of medication he is consuming. Our main man bears more mental scars than physical. The Gretchen case ruined him and his marriage and still casts a large shadow over him, particularly as he feels compelled to visit his nemesis every Sunday in prison, where she toys and plays with him before giving up the location of the body of another of her 200 nameless victims.

Cain cuts backwards and forwards with the narrative, presenting our current case and flashing back to episodes when Gretchen was torturing Archie. We discover more about what happened during the 10 days he was held prisoner. At times the descriptions of her physical torture is fairly graphic and explicit.

Cutting to our present day case, Archie and his team struggle to make much progress. The dead girls all look the same physically, but are from different schools in the area. The team worked the Gretchen case together previously and are a tight-knit bunch, all concerned and caring for Archie though he is somewhat aloof from them – no doubt a consequence of the trauma he endured and still suffers nightmares over.

Archie (for reasons I can’t remember) invites a young female journalist to observe and profile him offering her access to his estranged family, the team and Gretchen – assuming she agrees. Susan Ward becomes an integral part of our investigation.

Our investigative team, do eventually get a jump-start on the case and after the odd red herring and a bit of unlikely coincidence (or master manipulation from the evil genius behind bars) we get rolling again.

Interesting setting – Portland, I can’t recall reading anything from that area previously. Interesting characters – Archie obviously, Gretchen less so for me, though I did like the dynamic between the two. Something which will obviously be explored in our next series book – Sweetheart.

Enjoyable without ever catching fire. I would be ambivalent about reading more from her, if in fact my wife hadn’t read and enjoyed a couple more in the series herself and they weren’t already waiting for me.