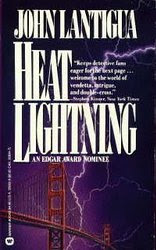 He’s a Chicano homicide detective and he knows San Francisco’s barrio like the back of his calloused palm. His latest case: the execution-style murder of an illegal Latina girl.
It is August. And it is sweltering. Gloria Soto’s corpse lies sprawled on the steaming sidewalk. A bullet has pierced her brain. Her thumbs are tied behind her back. Scrawled in the dirt next to her is the figure of a bull. None of it makes any sense, and Cruz hates the case already.

That was before he met the dead girl’s family, her lovers, her enemies…. And the terrifying past that trailed her all the way from the war zones of El Salvador. David Cruz will be caught in a dangerous net of vengeance, passion and betrayal – a world as dangerous as the jungles of Central America and as explosive as …. HEAT LIGHTNING

“GRIPPING…SUSPENSEFUL….MOVING. A fine book by a fine writer” - Denis Johnson, author of Angels and Fiskadoro

“Cruz, in his flawed humanness, is a perfect hero for the 1980’s,” – Library Journal

A 1987 read for Rich and his Past Offence’s Crime of the Century  meme. Seeing as this month I chose the year I ought to have had a read that knocks it out of the park. HEAT LIGHTNING though was good, maybe borderline great but not a knock-out punch of a book.

So we have a murder mystery set against a back-drop of 80’s Central American politics-civil war-strife with the murder of a Latina girl among San Francisco’s exiled Salvadoran community.

Chief investigator for Gloria Soto’s murder is David Cruz. Cruz, a Hispanic cop works alone from choice usually, as opposed to any racial separation from his colleagues due to his ethnicity. Cruz is as alone in his personal life as he is in his professional. Separated from his wife over his immersion in his job and a lack of ability to express any emotions or empathy or love towards family or friends. His outlook has been poisoned by his job.

Quickly he finds himself immersed in a community riven by bitterness and mistrust, not only of him and what his police badge represents but each other. Everyone he talks to lies to him as a matter of course.

Cruz follows his nose, hitting up on witnesses and interested players, once, twice and even three times, catching them in small untruths and deceits as he slowly unpicks the tangled web. It was interesting seeing both POVs from a bitter conflict.

Decent setting, I do like San Francisco based books, but wasn’t aware of a burgeoning Salvadoran community there. (I can't recall mention of the legendary San Francisco fog TBH.)  I can recall the period fairly well – Reagan and Contras and Oliver North and Nicaragua and the Sandanistas and El Salvador – probably more relevant back around the time it was written than today. (Who knows – is history repeating itself?) El Salvador’s Civil War was ended by the signing of a peace agreement in Mexico in 1992. 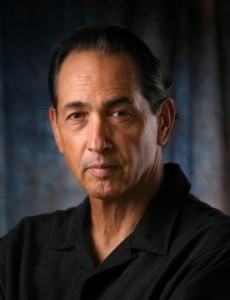 Heat Lightning was nominated for an Edgar back in the day.

I have another John Lantigua book on the shelves (in the tubs) – BURN SEASON (1989) – similar themes probably -  A veteran of Nicaragua's civil war opens a Costa Rican nightclub, determined to stay out of Nicaragua's deadly politics, but the war catches up with him when a spy is blown up outside the club

John Lantigua has his website here – he has written a few more books – including 4 in his Willie Cuesta series. Cuesta is a Cuban-American PI.