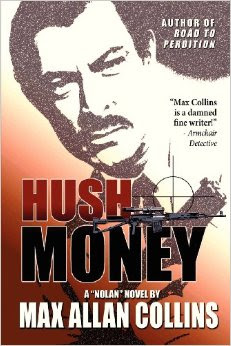 Someone is targeting crooked businessmen for death, and the Chicago Family turns to Nolan for help. Max Allan Collins's hard-boiled Nolan crime novels, steeped in Vietnam-era cynicism, are back in print with new Introductions by the author.

Back in 2013, I started reading Max Allan Collins and his Nolan series, though I got side-tracked after about 3 books. Hush Money is the fourth in the series.

Best book ever? No, but I enjoyed it.

From memory of the previous books, Nolan is a thief-cum-heister who had a falling out with the mob which led to a bit of a war and Nolan being on their hit-list for a number of years. This situation is now resolved and Nolan manages a hotel for them and is kind of living life at a slower pace though boredom is setting in.

Nolan appears about a third of the way into this book. (I was kind of getting concerned that he was going to show up at all!) Someone has been targeting a mob family and taking them out one by one, in revenge for we don’t know what at this stage.

Nolan is brought in to resolve the situation, so business can carry on as usual.

Great characters, maybe not as much action as in previous books though I could be wrong. There’s an interesting dynamic between Nolan and his young side-kick John – friendship? Probably more of a father-son, mentoring type-thing, with John the comic book collector always seeking to handle himself in ways that impress Nolan, without being too obvious about it.

Is it just me or are criminals generally more interesting people to read about than straight Joe’s?

Decent resolution, which offers interesting possibilities for the direction of the next book – Hard Cash which also appeared in the same year as this – 1981.

There's an interesting 2012 intro from the author, which sheds some light on the origins and history of the series with a tasty tit-bit mentioning some irritation and a little bit of friction from Don Pendleton who was a little bit sore about Nolan. (Nolan incidentally pre-dated Bolan, at least from a writing date, if perhaps not in print.)

Pendleton had his Mack Bolan - Executioner series on the go, in which Mack Bolan has his own holy war with the mafia. I did read the first of his books fairly recently - War Against the Mafia.

I know which of the two I prefer and which I'll be reading more from. Roll on August - Hard Cash awaits me!

Hush Money was bought for kindle a few years ago.