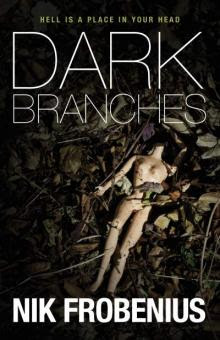 Author Joe Uddermann has published an autobiographical novel about certain dark events in his past. Expectations run high both in the publishing house and the media, but after an appearance on television sinister things begin to happen: anonymous letters, Barbie dolls with their heads cut off, dead squirrels on the stairs in front of his house. His life with his wife and daughter in Oslo no longer feels secure. Someone is out to get them. Understanding that a seemingly untameable desire has been brought back to life while Joe researched his novel, his wife accuses him of infidelity. George, whom Joe believed to be dead, shows up in the present. When their friend, Katinka is found dead, in an old rose painted coffin in a bog, suddenly there is no knowing who to believe or who to fear. Finally, Joe finds his daughter sitting on a stump in the forest, having seen something that neither child nor adult should see.

Another new author for me with Norway’s Nik Frobenius and Dark Branches. Frobenius wrote the screenplay for the film Insomnia which starred Al Pacino and Robin Williams and which was watched and enjoyed a few months back.

I’ve not read too much Scandinavian crime fiction of late so it was nice to get re-acquainted, with an added bonus being the fact that the book was only one page over the 200 mark.

Our main character Joe seemingly has it all; lovely wife, beautiful daughter and a career that is heading upwards after the release and positive buzz that surrounds his latest book. All is not well in Camp Uddermann though; Joe’s wife seems unsettled and believes he’s been playing away from home; his daughter finds one of her dolls decapitated and worst of all their childhood friend, Katinka is discovered dead in a trunk, murdered the same evening Joe had been to visit her.

Katinka had a difficult relationship with her husband. She’s connected to events from their past that Joe has exploited in his latest literary offering and which certain people are disgruntled about being aired again.

Is Joe suffering a breakdown? Is George the strange boy from the past really dead as his mother testifies? Why then is he stalking Joe and leaving him strange manuscripts? Why does no-one else seem to see this man? 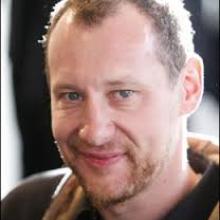 Joe – author with a disintegrating marriage, mental illness and murderer? Or troubled and isolated innocent?

Frobenius plays with the main character, Joe. You never quite trust or totally like him, but whilst he’s capable of deceit and betrayal, you don’t want him to be a murderer.

Thanks to the publisher Sandstone Press for my copy. Here’s a link to the author’s page on their website.
Posted by col2910 at 00:05