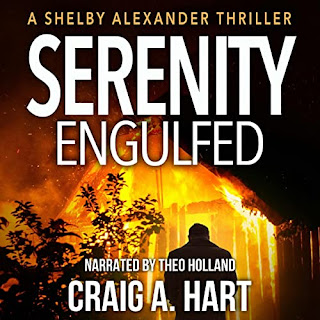 Synopsis/blurb ...
When Shelby's daughter, Leslie, fails to show up at his cabin for her long-planned visit to northern Michigan, he's concerned, but makes excuses.
When her car is found abandoned by the side of a tree-lined highway, he fears the worst.
When her cellphone appears on his front porch, he knows something terrible has happened, and that he is to blame.
Enlisting the help of the new county sheriff, Shelby launches a search for Leslie, all the while dealing with a prostitute in fear for her life, a sexy writer interested in writing his life story, and the long-banished ghosts of his own past.
Familiar enemies resurface in this blazing new thriller that finds Shelby racing against time to save the most important person in his life: his own child.
Serenity Engulfed is the fifth installment in Craig A. Hart's series of eight books featuring ex-boxer Shelby Alexander. I've enjoyed the previous four and this one was no exception. It never scaled the heights of amazing, but it was entertaining enough.
Decent main character, whose company I enjoy. Interesting dynamics between Shelby and best friend Mac, who always seems to pop up in Shelby's life when the brown stuff hits the fan. There's also a new sheriff in town, hopefully an honest one! She's a feisty Irishwoman, who seems to have a gift of second sight, anticipating Shelby's moves and actions, as he attempts to resolve his daughter's disappearance/kidnapping in his own inimitable way - decisive action and let's not worry too much about legalities.
There's other things happening as well. A prostitute gets a severe beating and an ex-girlfriend tries to get Shelby to step in and help. We get a bit more detail on Shelby's upbringing and past and some of it comes to the fore with a few ghosts and demons to overcome. There's even time for a bit of flirting with one of the locals, an ex-school friend of Shelby's who assists with some groundwork in Shelby's hunt for his girl.
Fast moving, enjoyable, and entertaining enough. Maybe the odd story strand  - a writer interested in writing a book on Alexander - was a bit unnecessary, as I don't think it really added anything to the tale, other than padding it out for a bit.