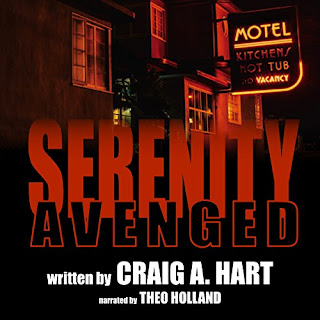 Synopsis/blurb...
A ruthless crime boss.
A mansion with a chilling secret.
A young man faced with the biggest decision of his life.
When his daughter goes into premature labor, Shelby Alexander leaves his northern hideaway for downstate. No sooner does he drive into town, than things go sour.
His ex-wife, Helen, faces deadly consequences after hard times force her to take desperate measures, setting off a dangerous chain of events.
Racing against time to save those he loves the most and avoid unspeakable tragedy, Shelby faces down an evil crime lord, trained killers, and one of the closest brushes with death yet.
The third book in the popular Shelby Alexander Thriller Series, Serenity Avenged takes readers on a breath-taking ride through a hail of bullets, close calls, and betrayal.
Craig A. Hart's Serenity series comprises eight books in total. Serenity Avenged is the third, following on from Serenity and Serenity Stalked and it's another enjoyable outing in the series.
Main character, Shelby Alexander travels to be close to his daughter, Leslie who is about to give birth to his first grandchild. It's an event he's looking forward to, less so being back in touch with ex-wife, Helen.
Helen is in the brown stuff. She's got a bit of a gambling problem and has borrowed money from a gangster, Darkmore which she is unable to pay back. Darkmore's nephew Jimmy has been tasked with collecting. Darkmore wants his money or a pound of flesh.
Helen is secretive about her problems (most gamblers are) and only after Shelby accidentally crosses paths with Jimmy, does the truth come out. Shelby, along with best friend, recently retired cop Mack take on Darkmore and his cohorts.
I quite liked the relationships in the book, especially how Shelby and Helen got past a difficult and acrimonius break-up. They both care for their daughter and choose to focus on the positive aspects of their shared history instead of the negatives. Young thug, Jimmy's relationship with his mobster uncle is also conflicted, especially as Darkmore had his father killed because he disappointed him. The more Jimmy finds out about his uncle, the less he fancies the world of crime.
A few of the events were a little bit sketched and a stretch for believability as opposed to portrayed realistically. Helen's issues with gambling aren't really explored in any depth other than she owes money. There's no real contrition on her part or examination of the evils of addiction and how she is going to address them. Similarly, Darkmore's torture chamber and capacity for violence was a little bit over the top. I'm fairly sure we could have still viewed him as ruthless and single-minded with a cruel streak without the butchery skills he delighted in displaying.
Other than those slight gripes I really liked this one. Story, conflict, characters, relationship dynamics, action, violent confrontation, humour, pace and outcome all plusses.
3.5 from 5

I'll defintely keep reading (listening) to this series. Hart has an engaging writing style which keeps me invested in what happens next. Theo Holland narrating is the cherry on the cake.
Read - (listened to) March, 2022
Published - 2017
Page count - 192 (4 hrs 2 mins)
Source - Audible purchase
Format - Audible
Posted by col2910 at 09:03