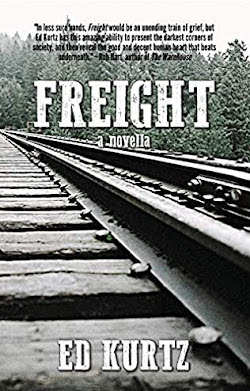 Synopsis/blurb …
To Enoch and Doc, two down and out men working as railway brakemen in an impoverished Texas town, it seemed like a simple enough heist: steal the copper wire off a train in the middle of the night.
But the boxcar contains more than metal. Soon lives are at stake and an unfathomable evil has to be dealt with. And there is no one in Blackwood, Texas for the job but a no-account ex-con.
"In less sure hands, Freight would be an unending train of grief, but Ed Kurtz has this amazing ability to present the darkest corners of society, and then reveal the good and decent human heart that beats underneath." -Rob Hart, author of The Woman from Prague
A tough, hard-hitting novella about some of the worst of mankind, contrasted by humanity, decency and kindness. Flip sides of a coin.
Enoch Ford is an ex-con working casually on the railways. He's kind of drifting around, enjoying a few drinks and some cards with the boys after shift and dossing down in a cheap motel or flophouse. He partners up with Doc to steal some copper wire from a freight car in the middle of the night. Instead of wire, they encounter crates of plastic dolls and something a lot more precious - three small, young, frightened children who speak nary a word of English. They have been trafficked and abused and put to work.
Against Doc's wishes and advice Enoch takes the kids. And someone now wants his property back.
Good, bad, evil, humanity, decency, indifference, conscience - all prominent in this short, compelling narrative.
I enjoyed this one. I liked the main character, owning his previous mistakes and trying to get on with his life. Albeit still up for a bit of theft to keep the wolf from the door and fatten the old wallet. When presented with a difficult dilemma his choices are an inconvenience to him and put him in danger. Doc equally had more good than bad in him, but was less compelled to intervene and cautioned against Enoch's actions. There's a contrast between being a bystander or witness to evil and having the fortitude to take action.
Before the end there's bloody conflict, violence and death and in conclusion some reflection. 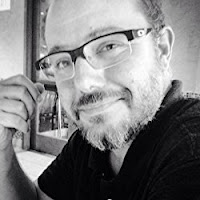