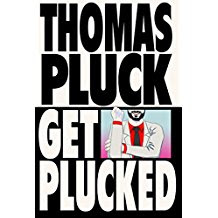 In a tribute to Elmore Leonard, a computer nerd and an Island barmaid race against the mob; a shifty construction foreman encounters zombies and sex dungeons in the aftermath of Hurricane Sandy; visitors review the Overlook hotel from THE SHINING; a psychotic virus hunter plans to unleash apocalypse during the panic of 2012; a kid who hides in the woods to scare urban legend hunters gets a surprise of his own, and eight more twisted, dark and funny tales that only Thomas Pluck could write. The latest collection from the author of BLADE OF DISHONOR and "Punk Dad Manifesto."

13 short stories from a new-to-me author (though I have since read Thomas Pluck’s new novel Bad Boy Boogie).

Humour, violence, sex, guns, the end of the world, white supremacists battling a black martial arts dude, mythical goat-men, a sneaky old couple pulling a fast one on a streetwise hustler and pacts with the devil.

If I’m honest not all of them rocked me, but there were a few in the collection that did.

From Acapulcolypse – humour on an end of the world cruise.

He squirmed aside as a flabby couple stumbled past in grass loinloths……. the man laughed, and conga-ed away with his wife gripping his generous love handles. Terence winced as their grass loincloths bared secrets to which he’d rather have remained unprivy.
Terence had also read that alcohol enemas were popular among the high school set, and would have preferred his cruise mates to partake of their liquor in that fashion as well, in the solitude of their cabins.

Gunplay – sex and guns – be careful of a hair trigger when the climax approaches – funny as fuck.

Other highpoints – Mannish Water – a couple of newly-weds on the run from a mobster.

Overall an enjoyable collection 3 from 5