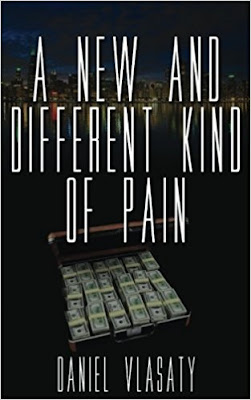 
David works for Anthony Benedetti, the meanest dude on the north side of Chicago. David’s his muscle. David does what Anthony tells him to do. So when he’s told to go pick up a briefcase containing half a million dollars from a sleazy bar owner, David doesn’t think anything of it. But when he loses that briefcase, he knows he’s really fucked up. Because Anthony Benedetti is not the kind of guy you want to be on the wrong side of. And now David’s got 24 hours to find the money, stay alive, and keep his very pregnant wife out of harm’s way.

"After reading this I can honestly say I may have already read the best book I will read this year. It is killer with no filler type of good." -- Derrick Horodyski, Out of the Gutter

I have previous form with Daniel Vlasaty. I absolutely loved Only Bones when I read it last year. When this one popped up in my inbox from Mike Monson at All Due Respect Books, I was like a dog with two dicks.

Only Bones was a hard act to follow, though Vlasaty put ticks in pretty much all the boxes here.

Chicago setting and a criminal gang with an established leader - Anthony Benedetti and our underling David treated like family. Benedetti is long suspected of “sorting” David’s abusive and violent father out many years previously when a traumatised and battered David turned up on their doorstep. His father was never seen again and David’s been on the inside ever since. Now with a job as a collector and enforcer and treated like a son. With these guys there’s nothing more important than family is there?

Err……. yeah there is MONEY!

David’s collected a suitcase full of cash for Anthony and he’s been jumped and relieved of his boss’s ill-gotten gains. The father figure isn’t impressed and David has 24 hours to recover the cash back and get himself back into Anthony’s good graces.

I liked the dynamics of the relationships in this - David trying to protect his family, the difficulties with his wife’s sister, the honesty between David and his pregnant wife Allison, the souring of things between Anthony and David, the scene with David and Anthony’s wife.

I enjoyed being in the main character’s head. David’s not totally likeable. We see him dish out a violent lesson to a bully with a calm indifference and brutal efficiency. We admire and respect him for his love towards his wife and his unborn child and we hope that things will turn out well. No harm in a bit of hope, no matter how tentative!

Great story and characters, fast-paced, a fair bit of brutality, but some memorable dialogue and verbal jousting also. And some lines that stay with you…..

One thing I learned growing up with my old man was how to take a punch. So there’s that. Not everything was a waste. I guess.

Excellent – a tale well told in under 80 pages!

Daniel Vlasaty has a website here. Facebook page here. On Twitter - @DanielVlasaty
His last book, Only Bones was looked at on the blog last year here.

All Due Respect Books responsible for both titles and my kind of publisher - Lowlife Literature - have their website here.