Can we ever escape the past?
A psychologist is determined to exorcise the demons of her past by working undercover as bait for a serial killer terrorizing Stockholm.

Identity – Part 1 is a serialised novel which was released by the author on her blog, a chapter a day over a number of weeks back in the early part of the year. Despite my best intentions of storing up the posts and reading a week’s worth at a time, I ended up saving and printing each episode and studiously ignoring them until Claire popped up a week or so ago and advised Part 2 would be on its way in a month or so.

Well I started in earnest a week or so ago and read the first 5 chapters from a full set of 50-odd one morning. Took a breather for a few days then whilst I was waiting in my car for my daughter to get her nails done the other evening,  blasted through from chapters 6 to 35, until nails were duly completed. When I got home, about 7pm, all Hank Marvin – I rushed my tea, eager to get back into things and finish, only to realise that my organisational and filing skills have failed massively. I couldn’t find chapters 36 and 37, so decided to re-visit Claire’s blog to read online, only she’s taken the bugger down with the exception of the first 4 chapters. Annoyed and irritated beyond belief, I sloped off to bed, before trying again the following morning. Fortunately the whole shebang has been added to Amazon UK. So digging deep into my pocket money and duly breaking the book embargo, I stumped up the £1.02 fee and got the remainder read that morning.

Identity is cleverly presented. We have the discovery of a murdered girl. We follow the investigative team of 3 officers, all of whom seem to be keeping secrets from each other. The belief is that whilst we are only investigating one murder, there are other recent disappearances that could be linked. Gradually we are introduced to a bigger cast of characters, some of whose roles are ambiguous…. are they helping the investigation, or are they suspects and perhaps responsible for the murder? Duffy releases little nuggets at a time, some of which enlightened me, some of which muddied the waters and stirred the pot rearranging my thoughts on how I thought things were playing out.

By the time I reached the end, I was a little more enlightened and a bit wiser, without there being a resolution to our case. Certain events and behaviours are still murky and I’m confused over a couple of character motivations, so a more measured reading may be in order……. or alternately Identity Part 2 proves the clincher. 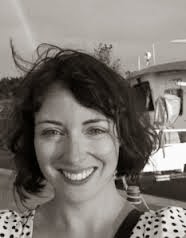 She blogs here at thegrassisdancing and has a separate Identity page here.

Interesting and engaging, as well as confusing and frustrating, which in turn made it a bit more enjoyable.