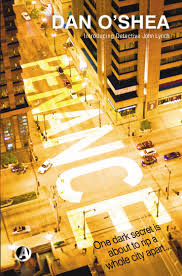 Synopsis/blurb/reviews..........
Product Description
Born and raised in Chicago, Detective John Lynch might just be about to die there too.

A pious old woman steps out of the Sacred Heart confessional and is shot through the heart by a sniper with what at first appears to be a miraculous and impossible shot.

Colonel Tech Weaver dispatches a team from Langley to put the shooter – and anyone else who gets in the way –in a body bag before a half-century of national secrets are revealed.

But soon the sniper strikes again. And Detective Lynch, the son of a murdered Chicago cop, finds himself cast into an underworld of political corruption, as he tries to discover the truth about what’s really going on – before another innocent citizen gets killed.
Review
Penance has one foot in Bourne and the other in The Untouchables, but tells a very human story of loss and atonement. A great thriller that ranges from the streets of 1970's Chicago to the highest levels of modern power, with tight dialogue and righteous violence. One for fans of crime, espionage and mayhem. --Jay Stringer, author of Old Gold

Penance is a rich, gritty, terrific novel. O'Shea can throw a punch and turn a phrase with the very best of them. Even better, he knows the human heart inside out. --Lou Berney, author of Gutshot Straight and Whiplash River

Immediately gripping and immensely compelling, Dan O'Shea's debut novel moves from gritty Chicago streets to the corridors of power with the sure-footedness of a master storyteller. Penance is many things - a thriller, a spy story, a complex tale of betrayal and atonement - but it is always a heart-pounding ride that leaves you breathless, and yet allows for unforgettable moments of grace. A must-read. --Hilary Davidson, author of Evil in All its Disguises

Penance is my best book of the month so far. Part police procedural and part thriller, with conspiracies and cover-ups and black op. government agencies thrown into the mix, in an explosive novel set in Chicago with dual timelines of the early 70’s to the present day.

Fantastic, tense, exciting, satisfying, interesting, intelligent....but that’s enough about me. Penance is an amazing book with a credible lead in John Lynch. Lynch is back later in the year in a follow-up Greed. Likeable, capable and honest, what you'd want all detectives to be.

Hard to believe that this is the author’s first book, he’s going to have to go some to match this effort.

Rob at the Blue House reviewed this a little bit more coherently than me, back in 2013. He had a couple of minor niggles, which on reflection I could understand, but which I was more than willing to overlook.