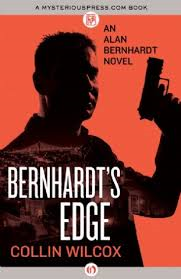 
A moonlighting director finds his sideline more dangerous than he expected

Alan Bernhardt is just starting rehearsal when his pager goes off. No one in the small San Francisco theater minds—they know that to make it on the stage, you have to be prepared to do all sorts of odd jobs off of it. But this director’s job is odder than most. He works for Herbert Dancer, head of a boutique private investigation service. A corporate secretary has vanished with a sheaf of valuable documents, and it will take an off-Broadway sensibility to bring her home.

Bernhardt is just closing in on the woman and her boyfriend when he learns that she isn’t running for a profit, but for her life. To save her from the men who hired him, Bernhardt must find her and protect her—because his artistic vision does not include blood on his hands.

This is Wilcox’s first book in a series of 5 featuring Alan Bernhardt, an actor-cum-director-cum part-time Private Investigator.

Bernhardt is hired to track down Betty Giles, a missing researcher. He locates her in fairly short order and after reporting back to his employer is stood down – job done. Before he leaves town, Giles’ travelling companion, Nick Ames is shot dead after leaving a local bar late at night.

Concerned that this is more than a coincidence and that he may be an unwitting accessory to murder, Bernhardt quizzes his employer and after failing to get any answers about who hired him, quits. A decent man with a conscience, Alan Bernhardt then sets out to discover the mystery of Betty Giles’ disappearance and what responsibility he might have for her boyfriend’s death.

After Ames’ killing, Giles goes on the run again. Bernhardt chases her a second time. Unknown to either, Ames’ assassin has been re-hired to silence Betty and permanently eliminate a threat to his employer. With alternating points of view, we follow Bernhardt’s investigation and enigmatic, black hit-man, Willis Dodge in a race to find Betty Giles first.

Having now read both a Bernhardt and a Hastings mystery, on balance I prefer this particular character to Frank Hastings. With nearly 20 years separating the two Wilcox books I have read; 1969 v. 1988, how much of that is due to the writer honing his craft over the years? Probably quite a lot in fact; Bernhardt’s Edge has a much stronger plot in my opinion.

With the present backlog of unread books and an embargo currently in place on adding more to the creaky shelves of the library, albeit an imaginary and ineffective one, I will (98% certain) desist from reading more from the author in either of his series.

Enjoyable enough but he hasn’t made it into the ranks of the must read authors.

Accessed thanks to the fine chaps and chapesses at Open Road Media via Net Galley.