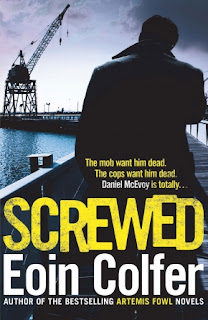 If Dan is to survive, he will have to evade bad guys on both sides of the law and find the missing aunt who once taught him how to handle boobs.
Eoin Colfer, author of the Artemis Fowl novels, turns his outstanding talent to a world as criminally funny as it is dark and compelling.

Well I had been looking forward to this for a few months now, having lapped up the first Colfer crime caper, Plugged when it came out back in 2011. Plugged introduced us to Daniel McEvoy and his small circle of friends, Zeb, Sofia, Jason and Ronelle. Fast, fun and fresh it was one of my best reads of 2011.
Second time around for McEvoy and the gang and I was bored and unimpressed for the most part. I can typically gauge my gut reaction to how a book is going by the speed at which I read it. This was 310 pages long and it took me a week or thereabouts to get to the halfway point.  Never a good sign.

Yesterday morning, on page 164 Colfer has McEvoy musing ......If it was up to me, I would throw in the towel right now and spare myself the rest of this shitty day.  Spooky how at that particular moment in time I couldn’t have felt any closer to Daniel!

However, being made of sterner stuff I cracked on and it improved enough for me to knock off the remaining half of the book yesterday morning and evening.  There were a few chuckles to be had and some enjoyable passages, particularly when McEvoy was at the mercy of the dodgy cops, Fortz and Krieger and also when he dealt with Freckles and Shea-ster.  These glimpses of sunshine alone weren’t sufficient to overcome what was for me a dull and uninspiring book.

McEvoy in the two years since I read the last outing is in exactly the same place emotionally as he was before. We have the same flashbacks and memories of his abusive father and difficult childhood. He has the same relationship issues with his delusional on/off (or never on to be more accurate) “girlfriend” Sofia. He shares the same tired banter with his irritating friend Zeb and his nemesis Mike is still on the scene.  Colfer puts McEvoy into situations with firearms that you know won’t result in him taking decisive action which could have concluded the book a hundred pages earlier.....why not?

In the final analysis, I was deeply disappointed having expected much more.  I haven’t been put off Colfer totally and I would read him again but not with the same cast of characters.

Oscillating between scoring it a 2 and a 3. Disappointment prevails 2 from 5

I borrowed my copy from my local library.