We have reached week 20 on the Crime Fiction Alphabet Journey hosted by Mysteries in Paradise.

It’s the turn of the T’s and after a bit of pondering I've come up with a few favourites from the Criminal Library shelves that grabbed my attention in the past and a few that will hopefully do so in the future.

This one was originally published back in the late 80’s. I would have read this sometime during the 90’s but don’t have a clue whether it was beginning, middle or end. I can’t recall too much about it, only that I was enamoured enough to buy at least one more book by the author- Country, a non-fiction book on a popular musical genre that every time I hear something from its stable has me reaching for the bottle of bleach to pour in my ears. Wise guys, tough guys, Mafia hoods........lovely jubbly! I have saved this for a re-read sometime.

This stunning Mafia thriller, now available in paperback for the first time, bears many of the hallmarks of Tosches's celebrated nonfiction: an uncanny familiarity with the darkest chambers of the human heart and a wildly elastic prose style. As Cut Numbers unravels a diabolically elaborate scheme to fix New York State's lottery, it reveals the Mafia that only insiders know - not the powerful, well-oiled crime machine of myth, but the messy day-to-day business of violent crime, pornography, gambling, and extortion. 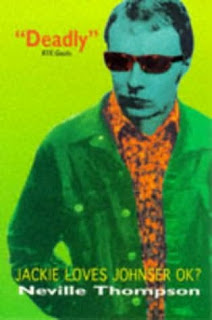 Late 2000’s for this one. Probably not crime fiction, more of a novel about people and it reminds me a lot of Roddy Doyle in the depictions of working class Dubliners. I have more from Thompson to get to at some point....including Two Birds/One Stoned and Mama’s Boys. Not as hard as Kerrigan but enjoyable nonetheless.

Johnser and Jackie grew up the hard way, fighting their way on a glass-splattered playground on a Ballyfermot estate.
They're both satisfied with their career choices.So why did Jackie marry Jeffrey the nice fella ?And why did Johnser marry Tara the slut ?And why was a gun pointed at Johnser's head as he relaxed on a Saturday night ? 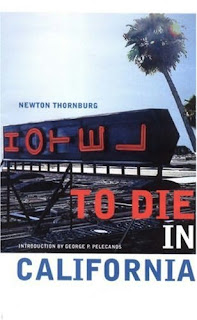 Newton Thornburg – To Die In California

The mid-70’s saw the publication of this one, though it didn’t cross my path until 2010, when I happened upon a re-issue with an introduction by George Pelecanos. An absolute belter of a book and I found it unbelievably sad. What parent couldn’t fail to be moved by Hook’s total sense of loss and bewilderment and his efforts to understand the tragedy that has befallen his family? Thornburg followed this with another highly regarded book, Cutter and Bone which I have yet to get to.

Informed by the police that his son Chris has committed suicide, David Hook, an Illinois farmer, knows that this cannot be true. He knows that something else must have happened in California to cause the death of Chris who loved life too much to take his own. He also knows that he must go West to find out what did happen. 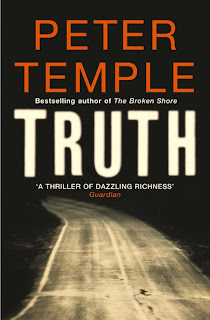 I think I have had this since about 2009, seeing as it first hit the shelves the year before. This is the second in a series, following on from the Dagger Award winning The Broken Shore; which I have read and enjoyed.  Temple is a four-time winner of Australia’s Ned Kelly Award and has three stand alone books and another series of four featuring Jack Irish. Although I haven’t read too many of his books, those I have got to have been superb. Probably about time he had something new out.

Stephen Villani is the acting head of the Victoria Police homicide squad. But his first months on the job have not gone well: two Aboriginal teenagers shot dead in a botched operation he authorised in the provincial city of Cromarty; and, no progress on the killing of a man in front of his daughter outside a private girls' school. Now five men are found dead in horrifying circumstances on the outskirts of the city. Villani' superiors and the media are baying for arrests. To add to his woes, some of the country's richest people are alarmed by the baffling killing of a young woman in the high-security tower where they live. Villani, a man who has built his life around his work, begins to find the certainties of both crumbling. As the pressure mounts, he finds that he must contemplate things formerly unthinkable. "Truth" is a novel about murder, corruption, family, friends, honour, honesty, deceit, love, betrayal and truth. 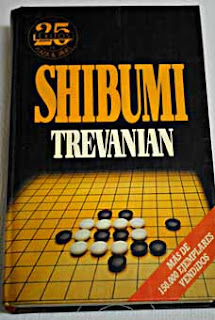 Trevanian was an author I can recall figuring prominently on bookshelves in the shops maybe 30 years ago. His most famous book is probably The Eiger Sanction which was adapted for the big screen and starred Clint Eastwood. A few of his books could probably be classed as Spy Fiction, which I developed an interest in a couple of years ago. I have probably had this on the Library shelves maybe two or three years. More recently, Don Winslow (another habitant of C’sCL) penned a follow on to Shibumi – Satori, another unread tome in the library; though one not quite as dusty.

A westerner raised in Japan, he survived the destruction of Hiroshima to emerge as the world's most artful lover and its most accomplished assassin. His greatest desire is to attain a state of effortless perfection . . . shibumi. But he is about to face his most sinister and corrupt enemy - a supermonolith of espionage and monopoly bent on destroying
him. . . .

Keith Thomson – Once A Spy 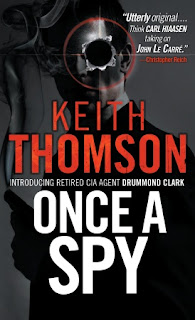 When tracking down some espionage type fiction a year or two ago, I came across Keith Thompson and his Once A Spy and Twice A Spy books featuring a father and son team. They weren’t especially easy to get hold off, as I don’t believe they’ve been published in the UK. But at some point I’m hopeful I can squeeze in this short two book series into my reading schedule.

“Huffington Post columnist Thomson’s wildly [espionage] original debut, a darkly satirical thriller, features an unlikely, if endearing, father-son spy duo: retired appliance salesman Drummond Clark, who at age 64 suffers from Alzheimer’s disease, and Charlie Clark, a down-on-his-luck gambler who owes $23,000 to Russian loan sharks. Soon after Charlie rescues Drummond from the Brooklyn streets, where he’d been wandering, the older man’s house blows up and the two barely escape with their lives. Clark and son begin an adrenaline-fuelled cross-country flight in which they must evade ruthless CIA assassins long enough to understand why they’re being targeted. During rare moments of lucidity, Drummond hotwires a car and effortlessly kills multiple assailants, suggesting to Charlie he was once much more than just a washing machine salesman. Poignant themes of love and redemption underpin an action-packed story line that includes exotic locales, high-tech gadgetry, and international intrigue.” —Publishers Weekly

Back next week with some U’s.

Check out the link to see what other bloggers have selected for their T contribution.