The Crime Fiction Alphabet for 2013  hosted by Kerrie at Mysteries in Paradise has reached week 16 and we are up to the P’s. Please hit the link to see what other crime fiction fans have posted for this week.

Unlike last week, where I was scratching and scraping to assemble a line-up from the shelves of my collection, this week I probably have too much choice.

Ignoring Gary Phillips, Richard Price, Leonard Padura and Stuart Pawson among others, I have plumped for the following enjoyed and unread selections from over 20 years of crime fiction reading.

Spoiled for choice this week, I have upped my ante of enjoyed reads to 4! (I was unable to choose which to omit.)

I discovered Petievich probably in the early 90’s on one of my bi-annual jaunts to the Murder One bookshop in London. Murder One used to be my only available source of non-UK published US crime fiction at that time. Petievich wrote about 9 books in all with his last published in the early 2000’s. He penned a short 3 book series featuring Charlie Carr, a treasury agent. Money Men is the first in the series and also his debut novel. I’ve still got all of his books at home and I have probably read 6 or 7. All of the ones I’ve read were entertaining, short, sharp, fast reads. I couldn’t give you any more detail than that without re-reading, which I’m hoping to do at some point. Petievich is 70 years old next year and I sort of hope he is still writing and may get back in the game with a new book at some point.

Book Description - Charlie Carr is Petievich's ruthless T-Man, a hard-nosed detective in the gutsy, no-nonsense tradition of Dashiell Hammett and Raymond Chandler. In Money Men, Carr is hot on the trail of two thugs who have gunned down a young undercover agent - a torturous trail that will lead from the smoke-filled hangouts of sordid Chinatown, to a desperate scheme to steal counterfeit money from counterfeiters themselves, and finally, to a brutal blood-drenched confrontation in a magnificent penthouse overlooking the streets of LA's seamy underworld. 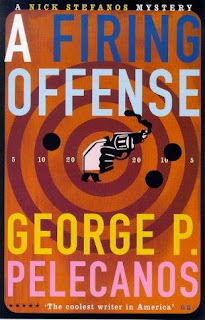 Pelecanos might be better known these days for his work on the acclaimed TV series The Wire. Author of nearly 20 books in the last 20-odd years, since I read my first of his, I have stuck with him. He has a few, complex inter-connecting series with over-lapping characters which are absolutely superb. This one is the first in his series of 3 featuring Nick Stefanos. I’m about 2 books behind with his published writing, so at some point I’ll be inevitably adding to my mountain of unread books. This one would be a good place to start if you are unfamiliar with his work.

When one of Nick Stefanos's stockboys disappears, he is reminded of himself 12 years before - an angry punk hooked on speed metal and the fast life. When the boy's grandfather begs Nick to try and find the kid, Nick says he'll try. 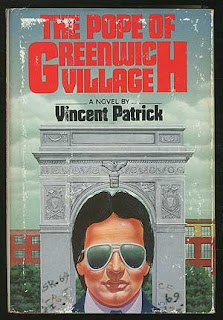 Patrick has only authored 3 books, though he has done a lot of work on screenplays. This novel was adapted by him for film and released in 1984 and starred Mickey Rourke. I don’t recall ever seeing it, but maybe one day. “The Pope” is a humorous tale that may or may not have had a little bit of influence on TV series, The Sopranos. I maybe read this 6 or 7 years ago, back sometime when I wasn’t keeping a reading record. I like books that set little guys at odds with Mafia types. I may have another of his books lying around unread at home, but I’m stretching my memory banks. Worth checking this one out if you cross paths with it.

Charlie, nicknamed "The Pope," manager of a New York City restaurant and barely able to stay ahead of his gambling debts, and his pals Paulie and Barney pull a heist that makes them targets of both the Mafia and the police. 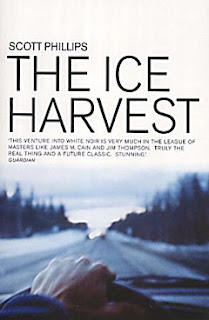 Fuzzy head time again here. I can’t recall when I read this (at least 10 years ago though) or too much about it to be truthful, but a small fragment of my brain retains the certain knowledge that I absolutely loved it. Another re-read at some point in the future! 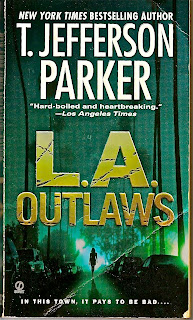 Parker is the recipient of a couple of Edgar Awards for best novel back in 2002 for Silent Joe and 2005 for California Girl neither of which I have read, though rest assured they are on the pile. I’ve read the first 3 or 4 of his published books including Little Saigon and Laguna Heat both enjoyable. In 2008 he started a series featuring Charlie Hood of which L.A. Outlaws is the first. To date the series has run to 6 books. When I eventually get around to finishing one of the 6 series I currently have on the go, I may slip this one into the schedule. I need to change up my series reads to introduce a couple involving cops rather than focusing on the solitary PI. Knowing me, I’ll have forgotten about it until next year’s Crime Fiction Alphabet hits the P’s! 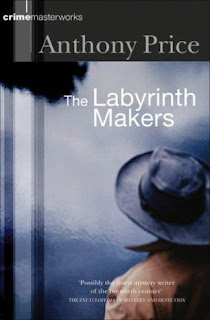 The Labyrinth Makers is the first book in an 18 or 19 long series from Price featuring David Audley. Originally published in 1970, this series is firmly entrenched in the espionage genre; something I hope to read more of in the coming months, years and decades ahead. I have probably only been aware of this author for a couple of years, so the book hasn’t got too much dust on it yet!

When an RAF Dakota, presumed lost at sea in 1945, is discovered in a drained lake in Lincolnshire, together with its pilot and a cargo of worthless rubble, it falls to David Audley of the MOD to puzzle out just why the Russians are so interested, and what the plane was carrying that is important enough to kill for. 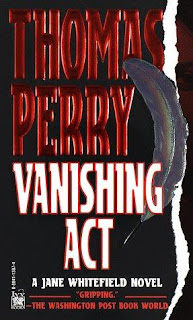 I haven’t read as much of this author as I would have liked to and I have no-one to blame but myself. My favorite of his so far is The Butcher’s Boy.

Vanishing Act is the first in his regarded Jane Whitefield series. I think there are about 7 so far. The first 5 have a lot of fans, but the latter 2 which were published after a bit of a hiatus for some reason have been slightly less well received. Maybe next year I’ll get a start on this series. I don't read enough by female authors, which Perry isn't, but it does have a strong female lead, which has also been lacking from my reading.

I do have his latest on reserve at my local library – The Boyfriend, which I will probably read next month.

Jane Whitefield, a Native American woman whose job is to help people disappear, uses her expertise to assist those looking for a new identity, until she is confronted with a new client, John Felker, who is not what he seems.

Next week, the 17th installment on the Alphabet journey I will be featuring some Q’s from my library; both past and present.