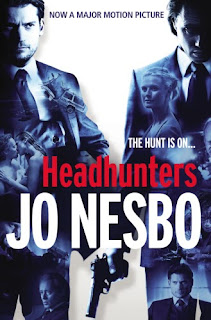 Roger Brown is a corporate headhunter, and he's a master of his profession. But one career simply can't support his luxurious lifestyle and his wife's fledgling art gallery. At an art opening one night he meets Clas Greve, who is not only the perfect candidate for a major CEO job, but also, perhaps, the answer to his financial woes: Greve just so happens to mention that he owns a priceless Peter Paul Rubens painting that's been lost since World War II - and Roger Brown just so happens to dabble in art theft. But when he breaks into Greve's apartment, he finds more than just the painting. And Clas Greve may turn out to be the worst thing that's ever happened to Roger Brown.

With the month fast disappearing and not having got my Scandinavian crime fiction fix yet, I was, after an exchange of views with Keishon from Yet Another Crime Fiction Blog tempted into giving this standalone book by Nesbo a spin.  Nesbo’s adult books tend to deal with his main character Harry Hole in a series of police procedurals, with Headhunters being his sole venture away from Hole.  My first experience of the author was earlier this year when The Bat, his debut novel was finally released in English for the first time. As the second Hole adventure doesn’t appear until towards the end of this year, my OCD tendencies steered me away from later books in the series, that have long been available in the UK.

Well, how did we get on with Headhunters?
At 380-odd pages long and only taking maybe 2 or 3 working days to read, it was fast and using the old cliché – a bit of a page-turner.

What was our overall assessment? Enjoyable, interesting, one to recommend?
Hmm.... I would have to say I enjoyed it, without actually being able to gush or enthuse about it dramatically. Would I recommend it.........I wouldn’t put anyone off reading it, but conversely it’s not a book that I will be forcing on to other people either. A bit of a fence-sitting here.

What was the problem then?
Whilst the plot and premise of the book interested me to a degree, my main problem was that Roger Brown wasn’t particularly likeable. There’s a thin line between characters that exude self-confidence and have an appeal that has you rooting for them and characters that emit arrogance and leave you indifferent to their fate. Brown/Nesbo crossed the line, whether Nesbo intentionally portrayed Brown in this unflattering way would be interesting to know. His combatant in Headhunters, Clas Greve instead of contrasting with Brown was of the same ilk, gaining his super-ego from having previously excelled whilst in the Dutch military.
The plot was a little bit far-fetched, but as all fiction is made up words, I was ok suspending belief for the duration of the story. Nesbo introduced a twist towards the end, that whilst not quite telegraphed had a certain predictability about it. I was a little bit confused at the switch around, but not enough to force myself to re-cap and reread maybe the previous 10 or so pages to see if it was totally plausible or to perhaps pick-up on a small hint I may have missed.
The characters I liked most in the book were several of the supporting cast. One whose name escapes me was Brown’s partner in crime. I found myself somewhat sympathetic to him, particularly as he was so hopelessly love-struck, though I’m not sure his paranoid tendencies would have earmarked him as ideal boyfriend material. The second character I enjoyed was Ferdy, Brown’s underling in the workplace. Had both Brown and Greve exploded from a dangerous overload of testosterone, I would happily have watched Ferdy sail in to take the spoils.

Overall?
I’ll go a 3 from 5. There wasn’t enough about it to merit a 4 or drag it above the barrier of averagely-interestingly- enjoyable. It was better than a 2, insofar as I was never mired in treacle reading it or ever felt like stopping at any point.

I’m unsure where I picked up my copy from. It would have been late last year or early this year, second hand either via Amazon, E-bay or as a book swap.

I haven’t been put off reading more from Nesbo, but as stated before will be holding off until I get my hands on Cockroach.

As a further note, I believe there has been a film adaptation of the book. I haven't been compelled to find out more about it, or hunt it down.
Posted by col2910 at 01:12