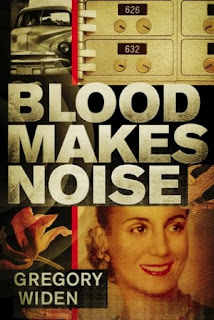 On a summer’s night in 1955, CIA agent Michael Suslov is summoned to a secret vault in the heart of Buenos Aires. His mission: transport the corpse of Eva Peron to a new hiding place in the wake of her husband’s fall from power. But before Michael can comply, everything goes tragically, horribly wrong…

Sixteen years later, Michael Suslov is a ghost of a man, an ex-government agent living off the radar—and the only soul alive who knows where Evita is buried. When an old friend from Argentine Military Intelligence appeals to him for help bringing the body home, Michael agrees, hoping this final mission will quiet the demons from his past. But he’s not the only one on a recovery mission: two rogue CIA agents are tracking him, desperate to unearth Evita before Michael does—and to claim the secret millions they believe she took to her grave.
Based on a little-known yet fascinating true story, Blood Makes Noise is a brilliant examination of the power of the dead over the lives of the living.

This book is the author’s first novel. Gregory Widen, a former fire-fighter and now a screenwriter and director has many films and projects on his cv. Highlander (1986) and Backdraft (1991) are the two I am most familiar with.

Argentinean history wasn’t something that I was taught much (any, actually) of in school and my first awareness of this nation would have been as a young football-mad teenager, thrilled by the exploits of Mario Kempes and amazed at the passion and unity displayed by the supporters during their triumphant hosting of the 1978 World Cup. The previous debuting of the famous musical in 1976, Evita - based on the life and death of Eva Peron would have passed my twelve year old self by, quite easily. Fast forward to 1982 in England and Thatcher’s Falklands War brought Argentina back into my consciousness.

Suffice to say, I began reading this book fairly ignorant of Evita and the shadow she cast over Argentina both when she was alive and for many years after her death (and for all I know of the country, still does today).
As a captivating tale, steeped in fact and historical detail, I probably enjoyed it much more because of my lack of previous knowledge.

Blending fact and fiction, Widen has created a captivating narrative involving a sympathetic and at times pitiful CIA agent, Michael Suslov. Suslov, married and a father-to-be is the eye and ear in Buenos Aires of the OSS/fledgling CIA. Isolated at work, Suslov shares an office with the FBI, which at this period under J. Edgar Hoover was deeply mistrustful of its younger, rival US intelligence agency. Shorn of support from his own “team”, Suslov is drawn closer to the enigmatic Hector, an Argentinean intelligence officer. Hector with dog-cane stick and his limp, whilst physically frail, is sharp enough mentally to stay on the right side of trouble in his home town. Seemingly impervious to the winds of change in Argentina, untroubled with Peron in power, similarly at ease with Peron in exile in Spain and a succession of fragile governments holding sway.

Evita; popular in life amongst the millions of Argentinean poor who loved Her like no other public figure was despised and feared by the rich. Her death in 1952 from cancer, in Her early 30’s, failed to rid the country of Her influence and Her memory was increasingly a de-stabilising influence on the establishment in the years following Her death. The subsequent attempts to stifle the Peronistas, led to the audacious plan to dis-interr Her remains and remove Her from the political landscape.  Suslov’s involvement with Hector in the plan, whilst ultimately successful, leads to the fracture of his family life in horrendous circumstances. Suslov buries Eva in secret, in Italy and departs the scene to the US and an existence in a shambolic pill-addled nightmare.

*Widen often refers to Eva as “Her” in his narrative, recognising the breadth of shadow she casts over all the characters in his compelling narrative. Whilst she is the central, iconic figure within the book, Widen doesn’t shy away from airing some of the less flattering postulations on Peron. Namely, she stole millions from her people and country during her life, which she secreted in Switzerland and that she was to put it mildly, a bit of a loose woman, prior to taking up with Juan Peron......fact? conjecture? Who knows, though it does add layers to the tapestry that Widen paints.

With the passing of the years and the on-set of the 70’s, Hector resurfaces. Argentina is still a country in turmoil, but the time might be right to bring Eva home. Suslov having survived one nightmare has a shot at redemption. With his life empty of meaning, Michael re-ignites his relationship with Argentina’s dead ex-First Lady. Unfortunately for Suslov he isn’t the only one obsessed with Evita and the millions she banked.

An explosive finale with a chase across Europe ensues.

Fact, fiction, history, power, corruption, intrigue, family, loss, obsession.....all play out in a fascinating novel. If I have one criticism it would be that at 442 pages long, it was a bit too short! Not often you’ll hear me carping about something of this length being too brief. The reality was, I was enjoying it too much to want it to finish.

I was fortunate to receive a copy of the book from Rachel Kinnard at Media Connect, New York – many thanks!