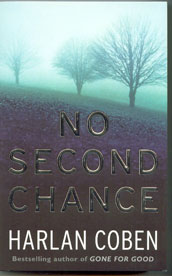 No Second Chance is yet another of Harlan Coben's terrifying explorations of the worst of fears--Marc Seidman wakes in hospital after narrowly surviving a shooting in which his wife died and their baby daughter went missing. The handover of a ransom from his rich in-laws goes wrong and Seidman realises that he is not only without wife and daughter--and the sister who may have been an accomplice--but he is also the principal suspect. The reader knows even more than Seidman just how much jeopardy he is in--Coben does a brilliantly disturbing job of introducing us to a pair of psychotics who are in charge of the ransom plot and who plan to take Seidman and his in-laws for another ride into insecurity and hell. Marc turns to the one person he thinks can help him--the ex-girlfriend who still has a place in his heart and used to be a senior Federal agent. The problem is that Rachel comes with baggage, and enemies, all of her own...

Coben is one of the crime writers I enjoy who is probably more mainstream than some of the authors I read. Chances are that after 24 or 25 books, you’ve happened on at least of couple of his titles when browsing the crime section of your local bookshop. He’s written a series of 10 books featuring  Myron Bolitar that has now digressed into a series of 2 so far, starring Myron’s nephew, Mickey. All of his other books are standalones, including this 2003 effort, No Second Chance.

Over the past year, I have maybe read 4 or 5 Coben’s as he is an author that my wife enjoys. This time around I grabbed this from her as she was struggling a bit to muddle through it. It’s been on the go for a couple of months, picked-up, put down, read a chapter, leave it for a week. When the reading is that spasmodic and interrupted, it’s easy to lose the thread and any interest you may have in the tale barely registers on the barometer.

Well having gained possession, I read about 200 pages on the first day, 100-odd on the second and the last 90 on the third, avoiding the pitfall that my wife had fallen into.

Verdict....... fast, interesting, enjoyable, likeable characters – including one of the rogues of the piece, a story that whilst stretching the bounds of believability didn’t transgress too far into the realms of fantasy to make me hit the switch to the off button.  Not the best of his I have read, but not the worst either. It was a decent enough filler, that won’t probably remain long in the memory but served a purpose until hopefully the next great read, happens along. Everything was kind of wrapped up nice and neatly at the end, which ironically irritates me just a little bit. If only life turned out like a Harlan Coben book, we’d all probably sleep a lot better in our beds at night, most of the time at least.

My/our copy was second hand and I’m unsure where or when I acquired it, not too recently that’s for sure.