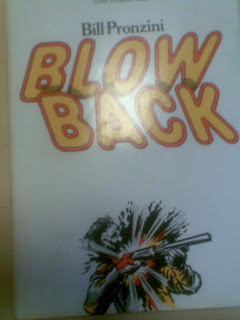 He's just gotten some bad news, and its impact has made him immobile and fearful. He's always known that the racking cough was not just something that was going to go away, that the ache in his chest was indicative of something more serious. And now he's found out that he has a lesion on his lung which could be malignant. He's set to sit and wait and do nothing else until he gets the results, but is swayed into action by a call from an old buddy of his from the service, Harry Burroughs. Harry has an isolated fishing camp in Northern California. Currently, he has several people in residence. Recent events have convinced him that the place is a powder keg waiting to erupt into violence. Therefore, the call to Nameless. What Nameless finds on his arrival is a simmering situation, mostly caused by the presence of a very erotic woman by the name of Angela who is there with her extremely jealous husband, Ray, who is even more combustible because he's a heavy drinker. Angela is a woman who plays sweet but gets deep underneath a man's skin and is nowhere near as innocent as she would have folks believe. And then the murders start. The first doesn't seem to have anything to do with the situation when a rug dealer is killed in his van. But then the inhabitants of the camp become targets, including Nameless. He faces more than the usual share of danger as he is entombed in a cave. The book has a little bit of everything—sexual intrigue, theft, murder, violence—all leavened by Nameless searching for the truth in a high tension environment.

My first book in July and this was a fairly decent start to the month. I found Nameless’ fourth outing in Pronzini’s (still going strong) long running series to be interesting and enjoyable without quite hitting the heights of some of the earlier books.

Most of my enjoyment with this series derives from the main character, Nameless and how he behaves and reacts to every situation he encounters. With few friends and currently no romantic interest in his life, it’s hard not to feel a great deal of sympathy for this decent, troubled man. Troubled.......? Since book one The Snatch, Nameless has been plagued by a ratchety cough which concerns him. Book four and the source of the cough has been identified as a lesion on a lung.... but with the test results not in, the inner monologue of the guy resonates.......benign, malignant, benign, malignant.....obvious concerns for his mortality are worrying both him and this reader. We’re all going to die one day, would there be anything worse than dying alone?
For me the mystery element of the book while interesting was secondary to the on-going mystery of his health. With 40 Nameless books under Pronzini’s belt, I’ll stick my neck out and guess he survives, but such is Pronzini’s skill as a writer, I’m still worrying.

I bought my copy of this book a month or two ago second hand from Amazon.
Posted by col2910 at 04:41