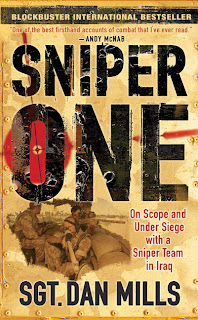 We all saw it at once. Half a dozen voices screamed 'Grenade!' simultaneously. Then everything went into slow motion. The grenade took an age to travel through its 20 metre arc. A dark, small oval-shaped package of misery the size of a peach ...


April 2004: Dan Mills and his platoon of snipers fly into southern Iraq, part of an infantry battalion sent to win hearts and minds. They were soon fighting for their lives.


Back home we were told they were peacekeeping. But there was no peace to keep. Because within days of arriving in theatre, Mills and his men were caught up in the longest, most sustained fire fight British troops had faced for over fifty years.


This awe-inspiring account tells of total war in throat-burning winds and fifty-degree heat, blasted by mortars and surrounded by heavily armed militias. For six months, they fought alone: isolated, besieged and under constant enemy fire. Their heroic stand a modern-day Rorke's Drift.
I have had this one on the go for a fair few months, in the door pocket of the car ready to read a chapter or so whilst waiting to collect my wife from work or pick the kids up from wherever they needed collecting from. For that reason, I didn't really get into it that much because the narrative couldn't flow only reading a page or so at a time.

Having removed it from the car over Christmas I actually managed to get stuck in.
Can't say I'm the biggest fan of the Iraq/Afghanistan excursions, but that's another story and a fairly old and boring one at that. Having said that, I have admiration for those that are in the services and the sacrifices that they and their families make.

Sgt. Mills has written a fairly decent book, perhaps a bit gung-ho in places, but hey he was there I wasn't. I'll be interested to see if he morphs himself into an Andy McNab/Chris Ryan purveyor of thriller-esque military/mercenary tales in the future. Might be worth a look if he does.

Another cheapskate charity shop offering from Willen Hospice, bless them.