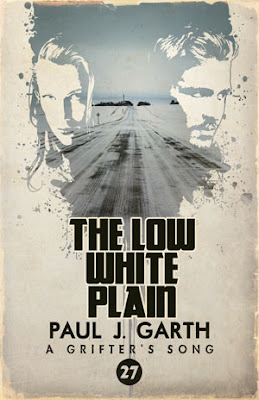 Synopsis/blurb...
Terrified and on the run after a disastrous con in Dallas, grifters Sam and Rachel find themselves trapped by a blizzard in Nebraska. Low on cash and nerve, they find a local job that seems easy enough: orchestrate the fake kidnapping of a down-and-out academic, then split the ransom with the "victim."
But underneath all that open space, malice and hate breed quickly. Sam and Rachel soon discover everyone is lying, and that this simple job is a lot more complicated—and dangerous—than either of them expected.
Trapped by circumstance and need, the grifters find themselves hunted by occultist Neo-Nazis, extravagantly armed private security, a crazed art dealer with cartel connections, and some of the most powerful institutions in the state, all while another blizzard bears down.
Caught between family, faith, money, drugs and power, Sam and Rachel can only rely on their skills, and each other, or see their own blood spread atop the constantly falling snow.
I'm a big fan of cons and grifters in my reading, although I don't read these types of stories as often as I should. A Grifter's Song is one of those series that I seem to spend more time and effort acquiring entries in, without ever actually getting stuck into the stories themselves. An opportunity to break that duck was always going to be too good to turn down.
The Low White plain (#27) is my first introduction to main characters Sam and Rachel. The pair are recovering from a previous con job (#26 maybe? maybe not) which hasn't gone to plan. As such funds are low, but also their confidence is a bit shaky. Against their better judgment they decide to get involved in a fake kidnapping to extort funds from a powerful and affluent businessman. His wayward stepson, having been cut off from funds is adamant that some bond remains between him and his stepfather in the light of the death of the mother and wife of the two men.
When the plan, conceived in haste inevitably falls apart, Sam and Rachel are pitted against white supremacists and a vengeful mark, in addition to the hangover from the last escapade. Snowy, desolate Nebraska with it's cold and blizzards also seems to be conspiring against them.
Conflict, double-crosses, betrayals, action, doubt, regret, history, poor choices, survival skills, death, relationship dynamics, and a lot more in a busy 120-odd pages.
I really liked the setting for the book, which had me echoing the couple's thoughts on their location - why would anyone want to live there? I liked the story line, though for a couple of professionals they did seem to be operating as amateurs for a large portion of the book. It did add to the fun. Everyone can have a bad day I guess.
Ticks in pretty much all the boxes - pace, setting, story (mostly), outcome and importantly for me - length.

I've enjoyed some of Paul J. Garth's short stories in the past. This longer offering has me excited about what he does next. There also a bit of impetus to get stuck into the series from the get go. Undoubtedly if I get through the first couple of dozen, I'll revisit this one at a later date. Meanwhile no. 28 has already dropped.
4 stars from 5
Read - June, 2022
Published - 2022
Page count - 119
Source - review copy from author
Format - Kindle
Posted by col2910 at 05:41