BILL PRONZINI and JEFFREY WALLMANN - DAY OF THE MOON (1983) 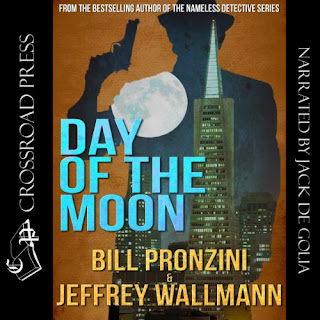 Synopsis/blurb...
The West Coast crime cartel known as "The Organization" has been beset by a series of problems: members are being murdered and merchandise hijacked. In walks troubleshooter Flagg, whose methods are those of a sharp-witted detective rather than a criminal. Soon he lays bare a plot behind the Organization's front - and now everyone is in danger.
Another day, another Audible listen and another book I enjoyed without being amazed by it.
The mob has a problem. Send in troubleshooter Flagg. Flagg, an unofficial PI type goes undercover to investigate why business has been disrupted.
Bootlegging competition, murder, truck hijacks, an inside job, a touch of romance, attacks on the investigator, danger, conflict and after 4 and a half hours a resolution.
I like criminality and books from the perspective of those operating outside usual legal and societal boundaries. Flagg was sympathetic, capable and someone who could have been just as successful operating on the other side of the law.
I listened to this one a few months ago, so it's fast fading from the memory banks. Overall the story kept my interest and the narrator is one of my favourites - Jack de Golia.
I'm a fan of Bill Pronzini's Nameless detective series, though haven't picked one up for a few years. I've yet to find a standalone book of his that meets the standard of the dozen or so Nameless mysteries I've enjoyed. The search continues. Jeffrey Wallmann is not an author I had previously read before, or indeed heard of.
3 stars from 5
Read - (listened to) March, 2022
Published - 1983
Page count - 228 (4 hrs 39 mins)
Source - Audible purchase
Format - Audible
Posted by col2910 at 11:19