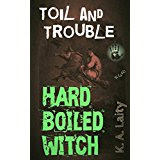 Hecate Sidlaw finds herself caught between a wannabe witch and one of the oldest hereditary powers in the land. When she and her familiar Henry end up as seconds in a magical duel, will anyone be left standing at the end of the shootout? Enter the dark streets and weird magic of HARD-BOILED WITCH and your life will never be quite the same. This is the second episode in the short story series.

In truth, not a book that will live long in the memory but you know what - it was short, (27 pages), it was seasonal - I read it around Halloween, it had witches and it was a lot shorter than Rowling's HP offerings.


Hecate's working away, her new neighbours turn up and introduce themselves. They're interrupted by the arrival of a young woman done up in her best Stevie Nicks clobber. A young witch is being harassed - drum roll please - Hecate Sidlaw and her cat Henry to the rescue.

Spells turning cobwebs into intruder alarms, pin-sticking magic in beeswax figurines, protection charms and a silent toad called Elvis, we climax with some duelling witches and a granny riding to the rescue.

An enjoyable half-hour or so's reading. A few cultural references, a bit of history and a bit of humour interjected into a narrative fuelled by an over-active imagination. 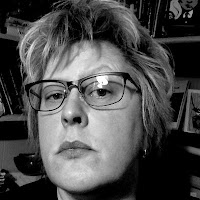 I read the first in the series of short Hard-Boiled Witch tales - Hocus Pocus You're Dead last year.

An author I'll be reading more from in the future.