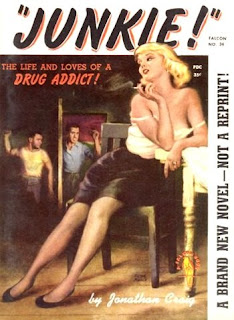 BY DAY-A PART-TIME SECRETARY BY NIGHT-A FULL-TIME PLAYGIRL "How long ago was that?" he asked. In the glow of the match her face seemed almost too angelic to be real. An angelic call-girl, he thought. "About a year ago," she told him. "But it seems longer." "How'd it all begin, Kathy?" he asked suddenly. She glanced at him quickly, then away. "They always ask that," she said softly. "Always." "I'm sorry," Steve said, meaning it. She pursed her full lips and blew smoke out slowly, gazing toward the river. "There was a man, of course," she said. "There always is."

Blogger fatigue kind of put me off making any notes on this one around the time I read it – at the back end of July. From memory, it was short and enjoyable enough.

Steve Harper is a jazz musician, a trumpet player with an on-off thing for Kathy. Currently off because he played around on her, which is something he deeply regrets. Kathy, with her chequered past is in trouble. She has been placed at the scene of a crime – the murder of musician, Wally Haynes. She has now gone missing and the cops are quizzing Steve over her whereabouts and ask for him to keep an eye out for her and help bring her in.

Steve, despite the circumstances refuses to believe she was capable of murder, starts asking around. If he can find her, he can save her and perhaps save them.

A lot to like – it was short, it was free (Munsey’s) and it had a fair few twists before we get things straightened out in the end.

Well worth an hour or two of anyone’s time.

One added bonus for the completist that I am – it was published in 1952 which was of course the only year I have missed thus far on Rich Westwood’s Crimes of the Century meme over at Past Offences. So I’m all caught up albeit 12 months after the event.

Jonathan Craig wrote more than a few novels in his time and you pick get hold of a couple of them for free at Munsey’s. Here.

Craig was a pseudonym of Frank E. Smith, a Californian who also wrote gothic novels and westerns. He died in 1984. I'm unable to locate an author photo on the net.

Thanks to John Grant of Noirish for the heads-up on this one.
John’s more coherent thoughts on Junkie are here.