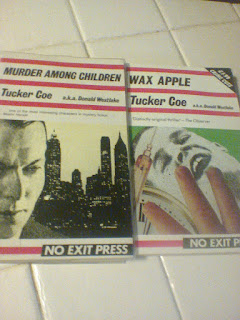 Tucker Coe was one of Donald Westlake's adopted pseudonyms during his writing career. As Coe he published 5 books in a series concerning an ex-cop, Mitch Tobin. Tobin was forced off the police force in disgrace and is now working as an private investigator.

Five books appeared in the late 60s and early 70s. I've read one of them but can't remember which and hopefully I can locate all 5 whilst sorting out my tubs of books. I'd like to read them sequentially one day. 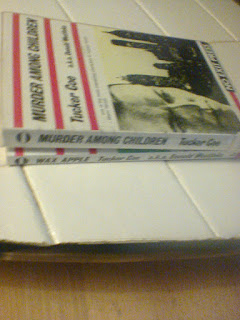 Westlake also wrote the Parker series of books under the Richard Stark moniker, in addition to the famous and highly regarded John Dortmunder series which was published under his own name.

I'm more of a Parker fan than Dortmunder, though I will be giving the hapless thief a chance to impress me when I tackle some of this series. 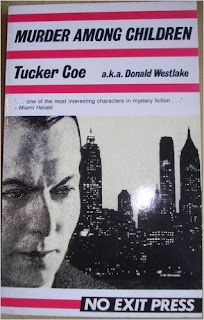 They were just kids really, too young to have adopted the requisite pretenses of adulthood. But they sensed a new age dawning so they dropped out, left home, and moved to New York City to do their own thing, which happened to be opening a Greenwich Village coffeehouse. All was going well until a cop stopped by with his hand out, and the partners freaked out-one of them remembered she had a cousin who was a former police officer, a certain Mitch Tobin. Tobin was a different kind of dropout; he'd been expelled from the NYPD and middle-aged cynicism had long ago replaced whatever youthful ideals he might have had. Awash in shame and self-pity, Tobin does his thing by building a wall around his house in Queens. Yet when his cousin, Robin Kennely, begs for his help, Tobin reluctantly agrees to take the long subway ride into the city. Arriving at the coffeehouse, Tobin is met with a grisly scene: there's been a double murder-Robin's boyfriend and a nameless prostitute have been brutally knifed. And Robin, covered in blood, is the police's prime suspect. 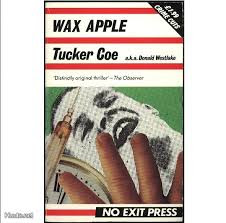 The Midway, a halfway house for convalescing mental patients where someone is setting nasty little traps that may prove fatal. It seems simple enough at first, just come as a new patient, be one of twenty-five, and then put it all together, stop the "accidents" and go home. So simple, but...five minutes after arriving Mitch Tobin is tripped at the head of a flight of stairs, leaving him with a broken arm, a headache, and no idea of where to begin. His first two clues aren't helpful, the Director's assistant seems to spend his time antagonizing the patients and one of the patients only appears in the early morning hours...and isn't registered. Then the fire escape collapses and the dirty game becomes murder! Now Tobin is responsible for two deaths and the pressure mounts.
Posted by col2910 at 00:10