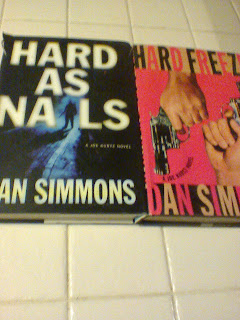 Dan Simmons was an author I first read back in 1985 when his debut horror novel Song of Kali appeared. I followed him for a few more books….Carrion Comfort, Phases of Gravity, Hyperion, Fall of Hyperion – which were either horror, fantasy or science fiction.

When my reading tastes change, he dropped from my radar; until I discovered he had written 3 crime fiction books which were intended as a homage to Richard Stark (aka Donald Westlake) and his amoral criminal Parker.  Stark had written a 16 book series with his career criminal starring between 1962 and 1974, before leaving the scene for 23 years. Westlake brought him back in 1997 with the ingeniously titled book – Comeback. A further 7 books followed with the last appearing in 2008 – Dirty Money.

Apparently Simmon’s man Joe Kurtz may be a Son of Parker.  There are 3 Joe Kurtz books. The first has been read and enjoyed and undoubtedly saved for a re-read. The second and third haven’t yet been cracked. 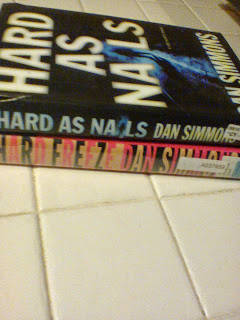 I ought to read them one after the other. 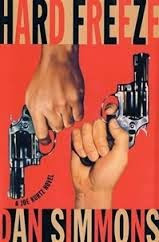 There's a bitter wind brewing in Buffalo, New York and it's blowing in more than just snow. "Little Skag" Farino, the last don of the local crime family, wants Kurtz dead and is sending in platoons of hit men, starting with the Attica Three Stooges and working up through more competent killers. Little Skag's beautiful sister, Angelina Farino Ferrara, is back from seven years in Sicily and has her own deadly agenda for Kurtz.

If that isn't enough, Kurtz is approached by a dying concert violinist who wants his daughter's killer found. Rejecting the case at first, he is soon on the trail of a man who's not just the murderer of one child, but a cold-blooded serial killer who is a master of alternate identities and has the power to send a hundred men after Kurtz. As the bodies pile up like cords of wood, HARD FREEZE hits town with the power of a whiteout blizzard and builds to a truly chilling climax. This is a crime novel where trigger fingers freeze to blue steel. 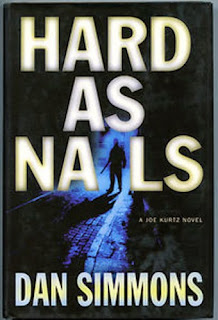 Somewhere in western New York there's a remote mountaintop in the moonlight, its dark forests and moon-dappled meadows populated only by corpses, and if ex-PI Joe Kurtz doesn't unravel the secret of that place in five days, he'll be one of them.

Everyone seems to want a piece of Kurtz and most succeed in getting one. Unknown assailants gun down Kurtz and his female parole officer, giving Kurtz the headache of a lifetime but putting pretty Peg O'Toole on life support. While working his own case through a haze of concussion migraine, Kurtz has to deal with Toma Gonzaga, the gay don who owes Kurtz a blood debt, and Angelina Farino Ferrara, the female don who is after Kurtz's body - or maybe just his head.

And while someone is murdering all the heroin addicts in Buffalo and hauling away the bodies, a serial killer called the Artful Dodger hatches his twisted plan.

In Kurtz's corner is police detective Rigby King, a beautiful woman who was his lover when they were both rebellious teenagers in Father Baker's Orphanage. Rigby also has designs on Joe Kurtz, but whether they're aimed at bedding or abetting him, helping him stay alive, or simply putting him away for life, Kurtz will have to discover the hard way. 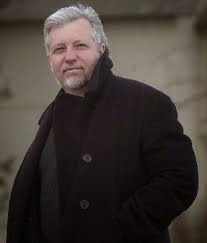