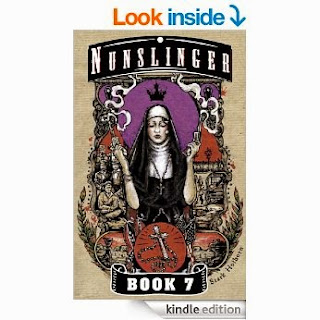 The events following the battle of El Paso del Norte found Sister Thomas Josephine fighting for her life. When she's returned to her St Louis, Missouri, convent an unwilling prisoner, she takes a vow of silence. But when she hears news of Abe Muir's survival, she must make a terrible decision: can she forget her promises to him and live the rest of her life in silence and contemplation? Or will she once again throw aside everything she knows and set out for Indian Territory?

Where once she rode an ungainly horse called Pokeberry, Sister Thomas Josephine will now find herself riding the rolling Mississippi River in search of action, adventure, and a soul worth saving.

Sister Josephine recovering from her injuries has been returned to her old convent in St. Louis. There she is visited by black US Marshall Benjamin Reasoner for questioning regarding six counts of murder. Reasoner recounts exaggerated newspaper reports of Josephine’s exploits which have been circulating, seeking confirmation.

He also seeks knowledge on the whereabouts of Abraham Muir, who Josephine had feared hanged. Muir had been involved in a breakout with Colm Puttick, a notorious outlaw and his gang during transportation to the gallows. Four guards were killed and they fled into Indian Territory.

“Every lawman and bounty hunter in the United States is after them now. Their heads are worth more than gold.”

When there’s a soul to save and the Lord’s work to be done, the laws of man get ignored. Josephine surprises Reasoner and disarms him. Stealing his coat, she flees the convent musing….

The convent had been my home. Throughout my travels its memory had been a source of solace…….

Those same walls had received me again, yet where once they had sheltered, they now confined. Now, I fled down the narrow passages that I had walked in pious contemplation. I was running from my own sisters, from my own Church, and the horror of that threatened to halt my flight faster than any lawman.

Heading for the docks and with only the coins in the pockets of Reasoner’s coat, Josephine tricks her way onto the Annabel Lee, the fastest steamer on the Mississippi. Posing as a student of medicine she gambles by commenting on a crew man’s festering hand and stitches it for him. Hallow the boat’s pilot sees through her disguise, recognising her for a woman, but not as the notorious outlaw she is. Experience tells him her medical skills could be of use, so she’s granted passage.

When they dock in Cairo, Illinois she seeks maps of the Indian Territory to assist her in her search for Abraham, bumping into Reasoner seeking the same. She takes flight again back to the ship, Reasoner and some men in pursuit. Before they can board the Annabel Lee, Josephine shoots the rope securing the craft to the dock. 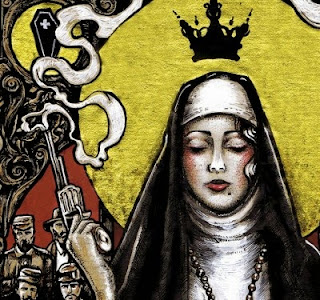 Having blown her disguise with her crewmates, Josephine is forced to reveal her identity.

Continuing on their journey downriver, the blazing wreck of the Admiral Milton stalls them. With the crew in peril after an explosion, Josephine and others mount a rescue attempt and board the sinking vessel. In the company of a party from land, including a preacher they encounter a trapped crewman in a burning boiler room. Brother Falk offers him God’s blessing, but the man seeks more immediate release from this earth and his imminent, painful death…… Josephine dispenses mercy through the barrels of Reasoner’s gun.

Another intriguing twist on our epic journey.