I do like the odd Western in my reading. I just think they are another sub-genre within the broad sphere of crime fiction. I guess I like a Splatter Western too, though I've not yet read one.

I don't know if it's a label appropriated or invented by Death's Head Press. Anyways I like the cut of their jib and the look of their books. Here's two from their canon. 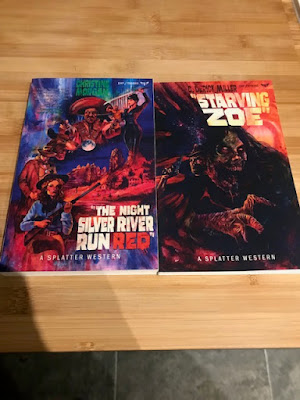 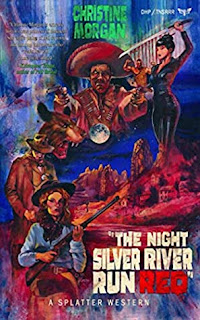 Some things, according to Cody McCall, are worth risking a whipping. Such as, sneaking out with your friends after dark for a peek at the traveling show setting up just outside of town. Oddities, the signs promise. Marvels. Grotesqueries. Exotic attractions and mysterious magics.

Not as if they'd be allowed to attend otherwise, not with parents and preacher and schoolmarm all disapproving. But how often does a chance like this come along? There isn't much else by way of excitement in quiet, peaceful Silver River, a once-prosperous boom town slowly gone bust.

Worth risking a whipping, sure. Worth risking life and limb, and maybe more? Worth risking being ripped to pieces by ravenous, inhuman brutes? Worth crossing paths with those strange, silent cult-folk from the high valley? Worth all the fire and bloodshed and horror and death?

Because something far worse than any ordinary traveling show has come to town, and one thing is for certain: those who survive, if any, will never forget the night Silver River run red.

(All Splatter Western books are stand-alone stories. Read them in whatever order you please!) 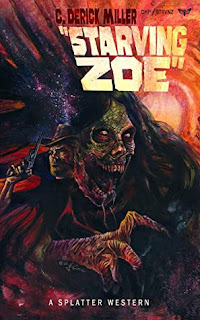 To most, 1865 was an eye-opening year. The American Civil War was officially over and the soldiers fortunate enough to survive the bloody conflict returned home to collect the pieces of their former lives. To young Arizonan, Robert Jack, the fateful desert homecoming marked the end to all he once knew.

Forgiveness is overrated. Death is final. Revenge, however, dances between the fine lines of mortality and eternity.

(All Splatter Western books are stand-alone stories. Read them in whatever order you please!)