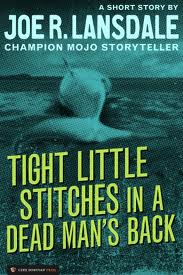 
Browsing Amazon and looking for availability on a couple of Lansdale’s missing Hap and Leonard books, I happened upon a few Lansdale freebies, of which this was one. Not sure if this should really count towards my year end books read total, as it could be a short story or a novella, but has been released on its own as a chapbook in the past. Anyway I’m claiming it.


I think Lansdale, the “Champion Mo-jo Storyteller” (self-proclaimed?), won the Bram Stoker award for this tale of survival in a post-apocalyptical world.


Descriptive, bleak, disturbing but ultimately unsatisfying..... It’s hard to feel a connection to the characters which makes you actually interested in how it all ends.