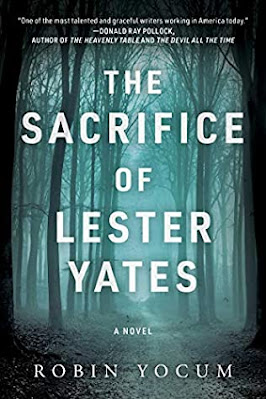 Synopsis/blurb...
A new political thriller from the author of bestselling novel The Essay.
Lester Yates is the notorious Egypt Valley Strangler, one of the country’s most prolific serial killers. Or, is he? Yates is two months from his date with the executioner when Ohio Attorney General Hutch Van Buren is presented with evidence that could exonerate him. But Yates is a political pawn, and forces exist that don’t want him exonerated, regardless of the evidence. To do so could derail presidential aspirations and change the national political landscape. Yates’ execution will clear a wide political path for many influential people, including Van Buren, who must battle both the clock and a political machine of which he is a part.
Robin Yocum has been compared with E. Annie Proulx for his authenticity of place, and Elmore Leonard for his well-laid plots and perfect pacing. Arcade is thrilled to publish The Sacrifice of Lester Yates, which is Yocum at his best: suspenseful, political, and smart.
Third time for me with Robin Yocum and his latest book, The Sacrifice of Lester Yates. The previous two of his were 5* STAR bangers in my opinion. This one while really good was a tad below the level of those earlier reads. Why? I don't know, maybe because I kind of guessed where it was going at around the halfway point.
A death row inmate, a ticking clock and a sense that an innocent man is getting railroaded.
I really enjoyed the book. I could buy into the plot, though it wasn't quite as subtle as previous Yocum books. The main character, Hutch Van Buren is likable, not lovable. With the countdown to the impending execution date of Lester Yates, there's an urgency to the narrative, though it doesn't have the breakneck pace of a thriller. Instead we have a driven investigation into the murder for which death row inmate, Yates was convicted and a concentrated effort looking at the murder of another of the Egypt Valley Strangler victims.
I liked the cold case nature of events..... the assembling of a trusted team, with interns and a lead investigator, the division of duties, the re-visiting of police reports and the digging for old surveillance tapes and credit card receipts, hunting down old press reports on the Strangler's victims, the re-interviewing of old witnesses and the distressing opening up of old wounds for still grieving families, all against a back-drop of political interference, masquerading as concern and a tight deadline.
Politics, corruption, control, career ambition, enablers, rivalries, infidelity, loyalty, popularity, a sense of omnipotence and superiority, set against a man with a nagging conscience in a dogged pursuit of truth and justice.
Overall - tremendously satisfying.
4.5 from 5

A Welcome Murder and A Brilliant Death have been enjoyed before. I've a few more from Robin Yocum to look forward to.
Read - February, 2021
Published - 2021 (in April)
Page count - 336
Source - review copy from Edelweiss - Above the Treeline site
Format - Kindle
Posted by col2910 at 05:01