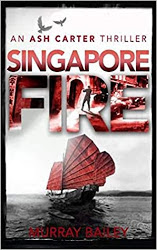 Synopsis/blurb....
She wants to escape
He wants to save her
But nothing is what it seems
Singapore 1954 and once again, private investigator, Ash Carter is caught between the government and the criminal gangs. It's time for Carter to choose.
Escape now or stand and fight?
Another trip slightly out of my comfort zone to the fifties and Singapore with Murray Bailey's latest Ash Carter Mystery Singapore Fire. I don't read too much set back this far and hardly anything at all with an Asian setting. Probably the last one that springs to mind, is the author's previous Carter book - Singapore Killer, which I enjoyed early-ish last year.
Here we have Carter trying to outwit a criminal king pin, Andrew Yipp and escape off into the sunset with the man's niece, Su Ling - the love of his life. At times the read is uncomfortable, namely because of Yipp's grooming of his niece from an obscenely young age. Pretty vile behaviour in any cultural or historical context. Ling is anxious to escape from her uncle's control, but there are more than a few obstacles in the way.
I liked the setting and the sense of concern of the British over the political situation with the first portents of an Empire losing it's iron grip. There are stirrings of discontent and a wiff of change in the air. For now the British remain in charge.
Criminal gangs, a dead prostitute, a counterfeiting operation, Communist gold, smuggling, Chinese New Year celebrations, the docks, the sea, a road trip or two, a murder investigation, the odd bout of fisticuffs, kidnap, a female investigative journalist - an early ardent supporter of women's rights, and a lot more besides. Fair to say it's a busy book with lots of different strands the author juggles before we arrive at an unexpected outcome.
I think it would be fair to say I liked it as opposed to loved it. It's a solid if not spectacular mystery and one which I read in a couple of days. I liked the main character, Ash and his sense of right and wrong. I enjoyed his fearlessness when confronted with difficult situations. If he has a failing, it's probably that he is too trusting. Not everyone plays the game by the same rules he does.