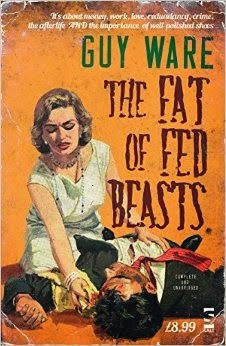 Monday lunchtime: a bank is being robbed. The gunmen tell everyone to get down on the floor, but an old man refuses. Behind him in the queue is Rada Kalenkova, an investigator for the Office of Assessment, recording everything she sees. Shots are fired and a woman is killed. Or maybe two. But Rada ignores the murders and pursues the old man instead.

Nothing about the robbery or the putative killings makes sense. The robbers might be police. The bank manager denies anyone was hurt, despite the blood on the walls. Every subsequent enquiry leads towards Edward Likker, a renowned fixer. But Likker is dead.

The Fat of Fed Beasts is an ambitious literary mix of existential uncertainty, murder, bureaucracy, unreliable father figures and disaffected policemen. It asks why we do what we do, whether it matters, and what, if anything, our lives are worth. And it’s funny.

‘Ware has an uncluttered prose style and a willingness to stretch the boundaries of fiction. His sensibility is finely tuned to those grey areas of experience where identities shift, where people forget who they really are. No other writer springs to mind as a ready comparison to Ware: already he has defined a unique thematic territory.’ AIDEN O’REILLY, The Short Review

I had fairly high expectations for this book and I whilst I enjoyed it and it was interesting and well written, by the time I got to the end I was left scratching my head, wondering what had happened and why, as well as what it all meant. Which the more I think about it, may have been the author’s intention all along.

We have the bank robbery mentioned above and Rada one of the team from the Office of Assessment breaches protocol by pursuing a live witness, when her employment is strictly concerned with the dead. The team at the Office includes, boss Theo – soon to be retiring, Rada, her half-brother – D. and Alex. D. despite his junior position has a high opinion of himself and is jostling for Theo’s position once he has gone. Their function is to look into the lives of the dead and make a recommendation as to onward destination – heaven, hell or limbo.

We have multiple narrators, which when they jump in, it wasn’t immediately apparent to me who was speaking and who’s head we are inside. This includes one of the bank robbers. The robbers themselves are an interesting bunch insofar as they are three police officers, one of whom is retiring in a few days. The others have also stalled in their careers.

Rada pursues the live witness. The robbery is investigated by a detective and also looked into by Rada’s brother. One of police officers-cum-bank robber fears the robbery resulted in a couple of deaths and there is mistrust and suspicion among the thieves. The one thief who knows claims she shot through the ceiling to quieten a panicking witness, though it was eerily silent after the second shot. The bank claim no-one died, but that’s an awfully big blood stain running up the wall in the bank. D. thinks he can profit professionally from his sister’s unprofessional behaviour.

Her suspension from work means her case-load is divided up between her colleagues. And introduces the mysterious and feared Lopez to the office. One of Rada’s cases is pursued by Alex and is the suicide of a lawyer - Rodkin who killed himself by sawing his throat with a bread knife. He is connected to Likker, a dead man, who was his client. Our bank robbery witness was attempting to withdraw cash from Likker’s account. Likker and Lopez knew Rada and D.’s father, who perhaps wasn't who he seemed to be and also died in unusual circumstances, tagged as suicide.

Things get confusingly resolved in our dead lawyer’s basement flat where Alex had been held prisoner for a few days by Kurt. (Who the hell was Kurt?) In attendance are Lopez, Alex, Rada, D., Theo, our investigating police officer and our bank robbers. Something dramatic happens and life then goes on.

Interesting and enjoyable, but my enjoyment was tempered by not really comprehending what it all meant. A re-read in a year’s time might offer me a better understanding.
Great characters. We share some of Rada’s home life, with her husband, Gary and their son. Her half-brother lives with them as does Alex. D. thinks Gary’s an idiot. Gary is too blinkered to comprehend this. Alex and D. don’t gel.

Some great lines dropped in throughout, one of which stayed with me…….

In life, I find the secret is to plan nothing, to want nothing, just to see what happens. What is offered. Such a life requires strength and stealth and is harder than it looks. 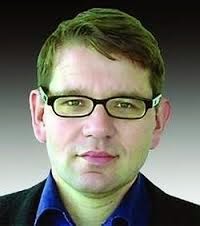 Oscillating between a 3 and a 4. On balance probably a 3.

Guy Ware has a book of short stories previously published – You Have 24 Hours to Love Us.

Thanks to Tabitha at Salt Publishing for my copy of this.