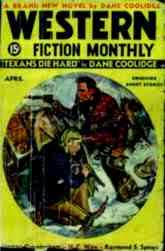 With nothing yet logged in the library from 1936, though I’m fairly sure that in a few month’s time I would have had a candidate for this monthly meme, most probably Graham Greene’s A Gun for Sale. With that in mind and loathe to buy anything I had a hunt around the net for something that would do the job. After downloading a William Faulkner story The Brooch, I eventually settled on a copy of Western Fiction Monthly for April 1936 and the complete novel – Texans Die Hard by Dane Coolidge.

I have long held the belief that a lot of Western novels are in fact crime fiction albeit with a specific back-drop. They probably aren't mysteries, insofar as the villain or outlaw is usually known to the reader and the book is primarily concerned with bringing him to justice whether through the courts, or as is more likely through some more immediate frontier-type justice at the end of a couple of smoking gun barrels.

Anyway – I've made my case for my inclusion in Rich’s 1936 monthly meme at his Past Offences blog. See what other participants read or watched here.

Texans Die Hard…….well an okay read but no more than that.

We have a cattle ranch operation on the banks of the Rio Grande. Buff Hall is the rancher and he’s primarily concerned with getting his cattle out of Mexico and back into Texas. Things are volatile south of the border with a revolution in progress and Pancho Villa trying to establish some authority and the villainous one-eyed Fausto Parral keen on disrupting things and kidnapping Buff Hall’s daughter into the bargain. He’s seemingly undeterred by the fact that his frequent letters to Anitra are torn into pieces unread.

We have the Texas Rangers in attendance and a bit of romance between the desirable daughter and the capable Ranger …. Winchester Irons. Another plot twist involves a rival rancher, the unscrupulous and cruel Pony Deal, the man who stole Hall’s wife and who may have less than step-fatherly designs on the daughter also.

There was the usual gun-play, a few chases, a kidnapping, some cattle rustling, some double-crossing, corruption, reneging, some rebellious Mexicans and some vengeful Mexican widows with a thirst for American blood, and more than a few border crossings…..to south, to north , to south, to north…….so many, I kind of felt I was watching a game of tennis at times. My neck was aching by the end of this one.

Does the course of true love triumph in the end and does the unscrupulous dirty one-eyed snake, Fausto Parral get his comeuppance?  What do you think!

Not rushing to read more from the prolific Coolidge but it served its purpose. 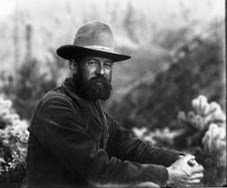 Dane Coolidge wrote over 40 novels in his life-time. He was born in Massachusetts in 1873 and died in 1940.

There is an author biography for Dane Coolidge at the Texas State Historical Association. Here.

There were 3 other short stories included in the April edition of this magazine and in the interests of completion I read them all. The full magazine comprised the following:

I downloaded my copy from UNZ.org. You can click on the link and get yours here.

As a further aside, I did have a look on various places around the internet to see if a standalone copy of Texans Die Hard was available, but couldn't find anything, so perhaps it didn't see the light of day on its own.

There was a note at the bottom of the first page advising that the novel would appear in a few months as a $2 book and that readers of the magazine could obtain it for 15c.

Another curiosity for me were the adverts within the magazine. Call me sexist if you like, but I was surprised at the number of them offering relief for period pains. I would have imagined that the target audience for Westerns tales would have been mainly men. I may have a few niggling ailments myself, but period pains isn't one of them.
Posted by col2910 at 00:05