We are well into the home straight on the Crime Fiction Alphabet Journey. We've reached Week 23 and some W – authors, from the ranks of the Library shelving are offered up for consideration.

Ignoring Charlie Williams, his near-namesake Charles Williams, Jess Walter and R. D. Wingfield – the creator of Frost, the selections chosen are as follows........

I would rank Willeford’s Hoke Moseley series as one of my favourites – 5 books long or 6 depending how you treat the unpublished but boot-legged manuscript for Grimhaven – which was eventually re-worked into one of the other books in the series. I think Miami Blues was also adapted for film, starring one of the multitudes of Baldwin brothers, but I've never seen it. (Can anyone tell them apart?)

Willeford in this series captured everything I love about crime fiction.....character, plot, humour and a sense of the absurd. Time for a re-read soon.

John Williams – Into The Badlands

I ought to mention this book as reading it in the early-90’s opened my eyes to various different US crime fiction authors. Williams travelled around the US meeting writers and exploring their cities.

If it wasn’t for Williams, my reading of the last 20 years would have been markedly different.

In the summer of ‘89 John Williams donned a baseball cap and took off for the States to search out the mythical America of the crime writers, the nation’s most astute chroniclers – to find James Ellroy’s LA, Elmore Leonard’s sleazy South Beach of Miami, Sara Paretsky’s Chicago. Meeting, among others, George V Higgins in Boston and Leonard in Detroit, partying with James Crumley in Montana and undertaking an unnerving tour of New York’s underbelly with Andrew Vachss, Williams discovers an urban America at least as disturbing and mesmeric as the popular fiction of some of his interviewees and gives us an unforgettable, often hilarious commentary on his own predicament as a penniless traveller living in a string of roachy motels.

“An acute journey, alive with the stark and the surreal”
GQ

“I learned a few things. There is vital sociological and moral comment here too”
PATRICIA HIGHSMITH

Daniel Woodrell – The Ones You Do 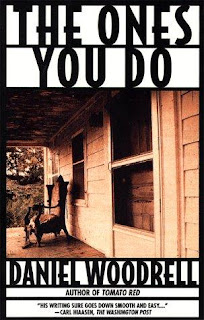 Loved it, loved it, loved it! Read it at least 10 years ago and whilst it was fantastic, at its climax I found it extremely sad. Woodrell is the kind of writer who could entertain me, if I was reading his shopping list.

"It's like dyin' old men all over the world will tell you - when you get aged and rackety and think back across your entire lifespan, why it ain't the ones you do, you regret, it's the ones you don't." Lunch Pumphrey is talking about sex, but he applies his philosophy to all aspects of life - which includes dealing with anyone who has the dim wit to double cross him and the bad luck to stick around for the consequences. And that's why old John X. Shade is on the lam, his nubile young wife having run off with $47,000 of Lunch Pumphrey's ill gotten gains, leaving John X. behind with an empty safe and a wise-ass daughter, the fruit of his middle age. Given a certified sociopath like Lunch on his tail, an empty bank account and hands too shaky to hold the pool cue that once made his fame and fortune, John X. has only one way to go: Home to the first wife and three sons - now grown - he abandoned years ago, back to the steamy bayou town of St Bruno.

Wambaugh had been quiet for about 10 years or so, at least in publishing terms, with nothing to my knowledge after Floaters in 1996, until this one in 2006. He has subsequently penned about 4 other “Hollywood” novels. It has been on the shelf and gathering dust for maybe 5 years or so. I do have a load of his earlier stuff to get to as well. 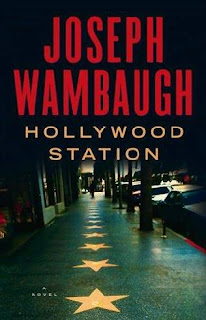 They call their sergeant the Oracle. He’s a seasoned LAPD veteran who keeps a close watch over his squad from his understaffed office at Hollywood Station. They are: Budgie Polk, a 27-year-old firecracker who is begrudgingly teamed with Fausto Gamboa, the oldest, tetchiest patrol officer. Andi McCrea, a single mom who spends her days studying at the local community college. Wesley Drubb, a USC drop-out who joined the force to see some action. Flotsam and Jetsam, two aptly named surfer boys who pine after the petite but intrepid Meg Takara. And Hank Driscoll, the one who never shuts up. Together they spend their days and nights in the citys underbelly, where a string of seemingly unrelated events lures the cops of Hollywood Station to their most startling case yet: Russians, diamonds, counterfeiting, grenades a reminder that nothings too horrific or twisted for Los Angeles. Here, it’s business as usual. For the first time in 20 years, Wambaugh revisits the kind of story he tells best life in the LAPD. Not only have his fans been waiting for this comeback, but readers of the new generation of police writing will have great interest in this book. 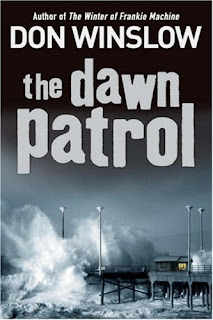 Winslow is one of those writers whose books I acquire but never seem to make the time to read. This came out in 2008 and was bought new. I have subsequently bought Satori, Savages and The Kings of Cool but not cracked the spine on any of them, which is fairly ridiculous. One of these years, I’ll start reading some of the back-log! I have read some of his earlier stuff, which I enjoyed.

The author of The Winter of Frankie Machine (“another instant classic”—Lee Child) is back with a razor-sharp novel as cool and unbridled as its California surfer heroes, as heart-stopping as a wave none of them sees coming.

Boone Daniels lives to surf. Every morning he's out in the break off Pacific Beach with the other members of The Dawn Patrol: four men and one woman as single-minded about surfing as he is. Or nearly. They have “real j-o-b-s”; Boone works as a PI just enough to keep himself in fish tacos and wet suits—and in the water whenever the waves are “epic making crunchy.”

But Boone is also obsessed with the unsolved case of a young girl named Rain who was abducted back when he was on the San Diego police force. He blames himself—just as almost everyone in the department does—for not being able to save her. Now, when he can't say no to a gorgeous, bossy lawyer who wants his help investigating an insurance scam, he's unexpectedly staring at a chance to make some amends—and take some revenge—for Rain's disappearance. It might mean missing the most colossal waves he's liable to encounter (not to mention putting The Dawn Patrol in serious harm's way as he tangles with the local thuggery), but this investigation is about to give him a wilder ride than any he's ever imagined.
Harrowing and funny, righteous and outrageous, The Dawn Patrol is epic making crunchy from start to finish.

I have read a fair few Westlake books in my crime fiction reading days, though mostly they were Parker books published under his Richard Stark moniker. Bank Shot has been on the shelves maybe 20 years or so, a second hand bargain that cost me about 30p. It’s the 2nd in the Dortmunder series and as I have read the 1st there’s no real excuse for not getting stuck in, apart from the usual complaint of too many books and not enough time! When John Dortmunder sets out to rob a bank, he really means it. He steals the whole thing. With the help of his usual crew, as well as a sophomoric ex-FBI man and a militant safecracker, Dortmunder puts a set of wheels under a trailer that just happens to be the temporary site of the Capitalists' & Immigrants' Trust Corp.
When the safe won't open and the cops close in, Dortmunder realizes he's got to find a place -- somewhere in suburban Long Island -- to hide a bank.

"One of the funniest conceptions you're going to come across...the ending is hilarious." (The New York Times)


Please visit Mysteries in Paradise to check out other bloggers Alphabet selection, here.

Off now to peruse the shelves of the library for X's - I don't think I will be gone too long!