It’s week 22 on the Crime Fiction Alphabet Journey hosted by Kerrie at her Mysteries in Paradise website. The turn of the V’s to step  into the spotlight. Here’s some selections from the heaving shelves of the Criminal Library. 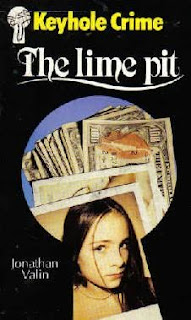 Valin wrote 10 or 11 Harry Stoner mysteries then stopped. I think I read somewhere that he went into music journalism. I’ve only read the first in the series, I don’t know how many years ago. Hand on heart I can’t exactly recall what it was about in any great detail, though I dimly recall enjoying it to the extent that I bought most of the series, but never actually read any of them subsequently. I recall a quote from a book I read recently, though the book’s name escapes me.......when we buy books, we actually think we are buying the time to read them......or something like that. I should get back to this series when I’m about 300 years old! Despite the set-up, I don’t remember it as a clichéd PI  tale.

This is the first in Vachss long running Burke series which I enjoyed early-90’s. Keishon, a champion crime fiction blogger and dare I say it friend, read this recently and unfortunately didn't enjoy it at all. I will re-read it at some point and some of his subsequent Burke books in the future to see if my opinion has changed....hopefully not!

Burke's newest client is a woman named Flood, who has the face of an angel, the body of a high-priced stripper, and the skills of a professional executioner. She wants Burke to find a monster for her - so she can kill him with her bare hands. In this thriller, Andrew Vachss's renegade private eye teams up with a lethally gifted avenger to follow a child's murderer through the catacombs of New York, where every alley is blind and the penthouses are as dangerous as the basements.

Ian Vasquez – In The Heat 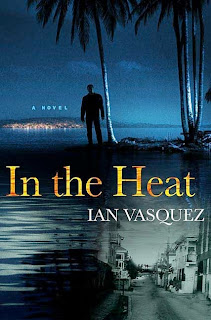 This is a fairly recent addition to the library and the first in a series of 3 by the author. This will be my first Belize based mystery as and when I get to it, which knowing me won’t be any time soon.

Boxer Miles Young thinks he's got one more shot in him before it's time to hang up the gloves for good. He may be the only one who thinks so. The truth is, he enjoys the recognition his career has brought him at home, in the small Latin American country of Belize, and he's worried about how he'll support his daughter once it's over. So when his promoter comes to him with a proposition that includes one last big fight, he listens.

Isabelle Gilmore wants Miles to find her daughter, who's run off with some of her mother's money and her no-good boyfriend. Isabelle's afraid Rian's going to marry the kid, the only son of corrupt ex--police chief Marlon Tablada, and she wants Rian---and the money---found. In return, Miles gets put on a fight card with a $30,000 payday.

He's reluctant, but Isabelle thinks a hometown hero can get people to talk in ways a private investigator can't. Trouble is, before he can find Rian, he learns that there's much more to Isabelle, her daughter, and Marlon than Isabelle let on.

Clearly at home in the world of hardboiled crime writing, debut novelist Ian Vasquez is a bright new talent who infuses In the Heat with a steamy, exotic voice all his own.

I’ve not read any Dutch based crime fiction, or at least I can’t recall any. This is the first in a 12 or 13 long series. I don’t think the short blurb does the book or series justice. Written in the mid-70’s, I’m interested in finding out how the Dutch police went about their work back then. Probably another 12 books to add to the wishlist if I enjoy this one! Apologies for the rubbish image.

Piet Verboom is found dangling from a beam in the Hindist Society he ran as a restaurant-commune in a quiet Amsterdam street. Detective-Adjutant Grijpstra and Sergeant de Gier of the Amsterdam police force are sent to investigate what looks like a simple suicide.

Is it cheating counting Vine as a V? Should it be R for Rendell? Either way I have not read anything by the lady who I think Ian Rankin labelled as Britain’s Greatest Living Crime Author. (I don’t think I made that up!) I think this won a Dagger Award of some description.

Jarvis lives in a crumbling house with a view of the Jubilee Line: he loves the tube with all its secrets - its hidden tunnels, its mysterious "ghost" stations, its incidents and accidents, which he records. He lives in a house which was once a school, but now he lets out rooms. 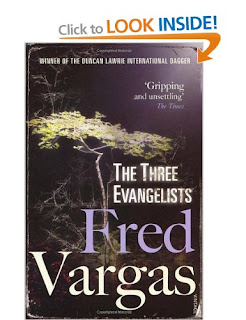 Bought it, when my mind was set on reading some European (non-UK/Irish) crime fiction and promptly forgot about it. It must have gathered dust for a good 6 or 7 years now. One day, but probably not particularly soon, I will give Fred a try.

The Three Evangelists is an enormously entertaining departure from Vargas's Commissaire Adamsberg series. Sophia Simeonidis, a Greek opera singer, wakes up one morning to discover that a tree has appeared overnight in the garden of her Paris house. As her husband doesn't give a damn, she asks her new neighbours to dig around the tree to find out if something has been buried. Her neighbours are eccentric: Vandoosler, an ex-cop fired from the police for having helped a murderer to escape, and sharing the house are three impecunious historians: Mathias, Marc and Lucien - the three evangelists, as Vandoosler calls them. They accept the job because they are desperate for money and rather curious. When they find nothing and Sophia's dead body turns up weeks later, they decide to investigate.

Back next week on the 23rd leg with some W’s.