PETER LEONARD - BACK FROM THE DEAD 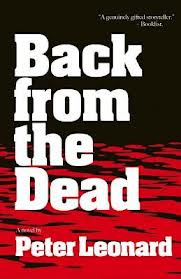 Peter Leonard's jaw-dropping VOICES OF THE DEAD introduced us to two mortal enemies: Holocaust survivor Harry Levin and Nazi death angel Ernst Hess. Now, their struggle reaches its dramatic conclusion in BACK FROM THE DEAD.

Bahamas, 1971. Ernst Hess, missing and presumed dead, regains consciousness to find himself stuck in a hospital bed on a strange ward in a foreign country. He must do what he needs to do to get his life back and to finish the job he has been doing for decades.

Harry believes he has already stopped Hess. When he finds out that the war criminal has somehow survived, Harry must do the only thing he can do kill Hess again even if it means crossing continents and putting his life and the lives of those that matter to him on the line.

Action-packed and darkly humorous, BACK FROM THE DEAD is the unforgettable conclusion to a story that launches Peter Leonard into the pantheon of great suspense novelists.

My first taste of this author and an enjoyable experience it was too. I’m not usually a fan of reading series books out of sequence, as it offends the OCD lurking within, but at the time I was unaware there was an earlier book – Voices of the Dead. Hopefully I can catch up with the first at some point.

Short-ish at 230-odd pages, Back From The Dead starts intriguingly, soon bursts into action and pretty much stays pedal to metal until the end.  Hess a Nazi war criminal versus Levin a Holocaust survivor, good v. evil, light v. dark.........an enjoyable, violent, bloody tale with Hess - a relentless amoral killer; cunning and manipulative, cold and callous but at the same time capable, intelligent, decisive and charming when he wants to be.  Levin is almost a mirror image of his foe, sharing many of the same traits and attributes but in possession of a moral compass, driven by a sense of loyalty for his friends and a thirst for justice, not necessarily administered by the legal authorities. Action spread across the US and Europe, fantastic twists as Leonard writes his characters into a box and believably back out again on more than one occasion. A fantastic read.

*Years ago, I made a throwaway remark on someone’s blog after they reviewed Quiver, the author’s first novel. I think my comment was along the lines of.......” not for me, probably only got published because of his dad!”    Pass me a big dose of humble pie as I couldn’t have been more wrong. With apologies to Mr Leonard and a note to self saying – “engage brain before commenting in future.”