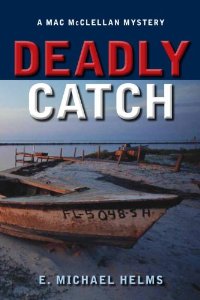 After twenty-four years in the marines, Mac McClellan is happy to be a civilian again and let others take charge, but that's not going to happen until he clears his name as the number one suspect in a murder.

When recently retired U.S. Marine Mac McClellan hooks a badly decomposed body while enjoying a leisurely fishing vacation in the Florida panhandle, and then a bag of rare marijuana is discovered stashed aboard his rental boat, he realizes someone is setting him up to take the fall for murder and drug smuggling. Mac and Kate Bell, a feisty saleslady at the local marina with whom he has struck up a promising relationship, launch an investigation to clear his name. Along the way Mac must butt heads and match wits with local law enforcement officials, shady politicians, and strong-armed thugs from the Eastern Seaboard to sniff out and bring the real smugglers and killer to justice.

Helms is another new author for me. Previously his Vietnam memoir, The Proud Bastards was originally published back in 1990 and has been reprinted at various times over the years. He has also authored a novel about the Civil War called Of Blood and Brothers.

Deadly Catch is a mystery novel set in Florida. Mac McClellan, our main man is a likeable, capable ex-marine on vacation. Divorced with a couple of grown up children, he’s doing a spot of fishing whilst deciding what to do with the rest of his life. Snagging a dead body isn’t part of his vacation planning and after a brusque encounter with the resident sheriff Bo Pickron, another veteran and war hero Mac’s life gets a little bit complicated.  When the corpse is subsequently found to be the sheriff’s niece and murdered to boot, Mac fits the bill as number one suspect.

Subsequent events do little to ease him back into civilian life and holiday mode..... a stash of dope is found on his chartered boat and then his trailer burns down. His developing friendship with Kate, who dismissed the spiky sheriff’s amorous attentions, previously, does little initially to calm the situation. Throw the feisty City police chief Merritt into the mix as well as some small town intrigue in the form of a long-time feud between two prominent families, one of which has just suffered the bereavement of the murder victim and top it off with some dope smuggling and the situation escalates for McClellan.

McClellan teaming up with an unlikely ally, digs deeper into the family feud and the town’s recent history to try and get himself out from under the frame that’s been clumsily assembled around him.

Only one minor, itsybitsy, wee gripe from me.........Kate, Mac’s friend and confidant has an irritating habit of saying the annoying word........ DANG! And not just on one occasion either. The irrational part of my brain had me half hoping she was kidnapped and bound and gagged as a sudden plot twist - just so she couldn’t speak!  I would hazard that the word is part of the local dialect, but for some inexplicable reason it just grated on me.

I was fortunate enough to receive a review copy from Lisa at Prometheus Books. Many thanks!

Deadly Catch is released on 12th November, and next year sees a second McClellan mystery from the author - Deadly Ruse. Something to look forward to in 2014!