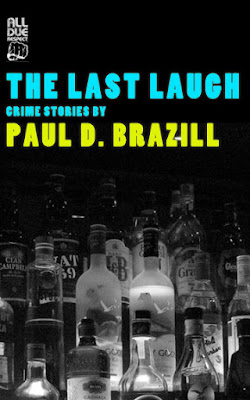 From France, to Spain, to the northeast of England, hit men, gangsters, corrupt cops, drunks, punks, and petty thieves all tumble toward the abyss. The stories in The Last Laugh are vivid and violent slices of Brit Grit and international noir, full of gaudy characters and dialogue sharp enough to cut your throat. The Last Laugh is a violent and blackly comic look at life through a shot glass darkly.

'Brazill isn't just a writer; he's a poet and you can take any of his stories and write a master's thesis on just the language employed.-' Les Edgerton (Bomb!, The Bitch)

20 short stories here from the master.

"Howie's jaw dropped so much you could have scraped carpet fluff from his chin."....

"if there’s one thing guaranteed to get my goat, guaranteed to wind me fucking up, it’s if someone pisses down my back and tries to tell me it’s raining.’

‘Seen it, I’ve had it. Many times. Mind you, Eileen Calloway has had enough cock to make a handrail round The Titanic.
They don’t call her Minge The Merciless for nothing.’
‘I heard they called her Come On Eileen because everyone had,’ said Garner. He smirked."

And my absolute favourite - so on the money! Nice to know it's not just me who can't stand the smarmy git.......

"The television was showing another bloody cookery programme. The fat lipped boy with the counterfeit cockney accent again. Peaslee wasn’t sure when it was that domestic drudgery like cooking and gardening had become elevated to the level of the works of Beethoven and Chaucer but it was another sign of what was wrong with the modern world. The pursuit of excellence had been replaced by the aspiration towards mediocrity." 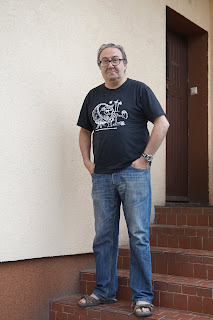 He was on the blog yesterday - answering a few questions here.

Thanks to Mike at All Due Respect books for my copy of this one - website here.