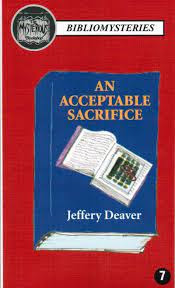 Synopsis/blurb ....
They call him 'Cuchillo' – the Knife. Not because he kills with a blade – he has plenty of men to do that kind of work for him – but because his mind is so sharp. As Mexico's government wages war on the drug cartels, it takes brains to survive, and Cuchillo has not just survived – he has prospered. But when Cuchillo begins to cut too deeply, the federal police of both the United States and Mexico step in to dull his blade.
P. Z. Evans and Alejo Díaz know the Hermosillo cartel is planning an attack on a tourist bus in Sonora, and they know they will have to capture or kill Cuchillo to stop it. The cartel leader has just one weakness: rare and ancient books. To destroy the intellectual's evil empire, this unlikely pair of policemen will have to appeal to his inner bibliophile.
A long short story from an author that I have tried once before, though can't actually remember what or when. Maybe the first in his Lincoln Rhyme series? At some point in the future I would like to give him a proper go. For now I tried this story.
I quite liked it to be honest. We have two main characters, both likable and interesting with appealing traits and both on on a collision course. I think I found the suspected bad guy, Cuchillo a little bit more engaging than his, as yet undetected nemesis, Evans.
Evans has come down from Washington to Mexico. He doesn't enjoy the heat, but other than a few grumbles he gets on with things. He's intelligent, inventive, capable and well versed in sneaky tricks.
Cuchillo is a Mexican businessman and he's the target of an assassination attempt by Evans with his black ops, off the books, American agency sanctioned but deniable operation. US Intelligence (an oxymoron - I'm joking!) think he's plotting an attack which will kill a bus load of innocents. The intention is take out him and prevent the attack. It's a lot easier said that done, as Cuchillo is well protected and insulated and is aware that he may be on someone's hitlist. He's a very careful man.
We spend time in his company and for long periods there is an inkling that the intelligence is wrong and that a pre-emptive strike by the good guys, will kill an innocent man (and not for the first time). We also see his weakness; a fondness for books and an impressive library and the avarice of a true collector.
I liked how things developed. Maybe the revelation regarding Cuchillo's true nature - evil or innocent - was a little bit blunt, but it got us where we were going. Deaver serves up a few more twists before a decent enough outcome.
Overall I had an entertaining hour or two reading this one. My appetite is whetted for something a bit more substantial from him.