Happy to report our Odeon re-opened shortly after the middle of the month and we got back to doing one of our favourite things.... 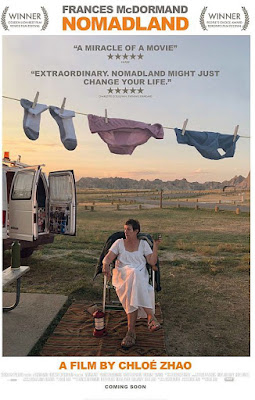 Nomadland (2020)
I can't say I've watched every film Frances McDormand has ever made, but I pretty much guarantee I've enjoyed the few I've seen her in - Fargo, Burn After Reading, Three Billboards Outside Ebbing Missouri - all spring readily to mind. I'm sure there were others.
She's pretty damn good in Nomadland. My daughter thought the film was quite slow and sad and I kind of get her point, but I probably disagree. I don't think the stories the picture relayed could have been told any differently and I didn't necessarily agree with her interpretation of sad.
I guess anyone who has lived to be a certain age has encountered loss, bereavement, disappointment and failure. It's how you deal and adjust to those traumas that define you.
Here we had people deciding to live life as much on their own terms as they could and despite the lack of wealth and material goods, they seemed to be doing a good job of it. Outsiders? Yes, but they probably had more fulfilling and satisfying lives doing their own thing than they had when subscribed to the rat race.
If there was a sadness in the film, it came to me in the death of a community that existed because of one employer. Close the plant and the reason for the town ceased to exist. Shortly thereafter it didn't.
Verdict - pretty damn good.
From Wikipedia ....
Nomadland is a 2020 American drama film based on the 2017 non-fiction book Nomadland: Surviving America in the Twenty-First Century by Jessica Bruder. The film is written, edited, produced, and directed by Chloé Zhao, and stars Frances McDormand (who is also a producer on the film) as a vandwelling working nomad who leaves her hometown after her husband dies and the sole industry closes down, to be "houseless" and travel around the United States. David Strathairn also stars in a supporting role. A number of real-life nomads appear as fictionalized versions of themselves, including Linda May, Swankie, and Bob Wells.
Nomadland premiered on September 11, 2020, at the Venice Film Festival, where it won the Golden Lion. It also won the People's Choice Award at the Toronto International Film Festival. It had a one-week streaming limited release on December 4, 2020, and was distributed by Searchlight Pictures in selected IMAX theaters in the United States on January 29, 2021, and simultaneously in theaters, and streaming digitally on Hulu, on February 19, 2021.
The film was praised for its direction, screenplay, editing, cinematography, and performances, especially of McDormand. It was the third-highest rated film of 2020 on Metacritic, which found it to be the most frequently ranked by critics and publications as one of the best films of the year. At the 93rd Academy Awards, it won Best Picture, Best Director, and Best Actress for McDormand, from a total of six nominations; Zhao became the first non-white woman and second woman to win Best Director, while McDormand became the first person to win Academy Awards as both producer and performer for the same film. It also won Best Motion Picture – Drama and Best Director at the 78th Golden Globe Awards, four awards including Best Film at the 74th British Academy Film Awards, and four awards including Best Film at the 36th Independent Spirit Awards. 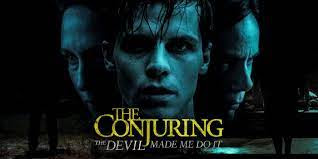 The Conjuring: The Devil Made Me Do It (2021)
Horrorish in tone, which is not my favourite genre. I'm just too nervous by half and I hate the anticipation leading up to a scare. My heart rate is usually quite low - high 50s maybe. Pretty sure it got up close to 100 here, which is probably more a reflection on me than how scary the film was.
Enjoyable performances from Patrick Wilson (The Switch, Insidious), Vera Farmiga (Bates Motel) , Ruairi O'Connor. Pretty sure I've seen one, if not more of the earlier films in the franchise, featuring Wilson and Farmiga.
Verdict - Not the worst I've ever seen. Enjoyable and a decent night out.
From Google ....
Paranormal investigators Ed and Lorraine Warren take on one of the most sensational cases of their careers after a cop stumbles upon a dazed and bloodied young man walking down the road. Accused of murder, the suspect claims demonic possession as his defense, forcing the Warrens into a supernatural inquiry unlike anything they've ever seen before. 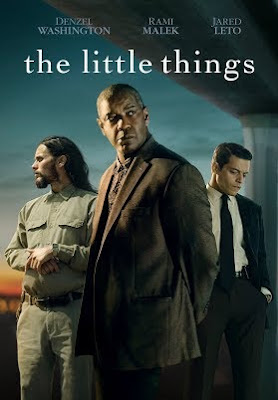 The Little Things (2021)
First film back after lockdown and a cracker in my opinion.
I like dark crime flicks and this was one of the better ones I’ve seen of late. The final scene with the trash burning at the end was maybe a tad predictable and is something I’m pretty sure I’ve seen somewhere else …. possibly in a book or maybe another film? I can’t quite remember.
Other than that, I bloody loved it. The film served up several surprises for me throughout and I wasn’t quite sure how it was all going to unfold.
I loved the performances of the three main characters – Denzel Washington, Rami Malek and Jared Leto. Leto exudes menace. Malek is intense. Denzel is Denzel.
Verdict - Top banana viewing. One I would happily watch again in a wee while.
From Google ...
Deputy Sheriff Joe "Deke" Deacon joins forces with Sgt. Jim Baxter to search for a serial killer who's terrorizing Los Angeles. As they track the culprit, Baxter is unaware that the investigation is dredging up echoes of Deke's past, uncovering disturbing secrets that could threaten more than his case.

3. The Conjurist: The Devil Made Me Do It