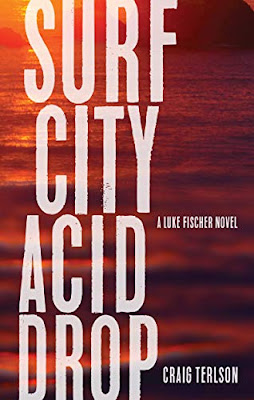 Synopsis/blurb ....
In between happy hours at the El Rayo Verde, Luke Fischer is hired to find people – even when he denies that he is a detective.
When Luke finds a dead junkie in his hotel room, he knows his lazy days of Mexican beer, surf rock, and Cholula soaked peanuts are about to end. Fearing the local policia will tie him to the murder, Luke bolts from Puerto Vallarta and abandons his search for his client’s wandering brother.
When Luke runs into a thug known as Mostly Harold, who has a fondness for lizard boots and Burt Bacharach, he discovers that he is not the only one looking for his client’s brother. Luke chases leads into Colorado Springs, the hazy mountains of Missoula, and all the way to the street life of Montreal. Along the way, Luke finds out the truth about his client, and why someone would pay a fortune for a bag of stolen rocks... but more importantly, why he was really hired.
Surf City Acid Rock is the first in Craig Terlson's Luke Fischer series. (Manistique, the second Fischer and one of my current reads, dropped about a month ago.)
In a nutshell .... a search for a missing person - for reasons that may or may not be truthful, a road trip or three, a couple of ass kickings received, with a few doled out, a few beers sunk, some decent coffee necked, plenty of miles on the clock, and after numerous other scrapes some answers. There are a fair few casualties along the way.
I had fun reading it, though I kind of felt as clueless as Luke seemed to be while on task. He denies he's a detective and I'll take him at his word. He just seemed to be always one step behind, a little bit like a puppet with someone else yanking his strings. Still what else did he have to do? More beer and coffee probably.
Beer, art, music, bus rides, heat, secrets, lies, food, restaurants, rest room brawls, a corpse in a motel room, lizard skin boots and more than one collision with Mostly Harold, a far more capable people finder than Luke. Harold gives Luke a run for his money in the interesting character stakes.
Overall - an enjoyable PI-type novel, chocked full of entertaining incidents, dialogue, humour, action, story, characters and setting.
Great writing to boot as Terlson has a tremendous way with words .....
Luke on a taxi ride...
"You like jazz?" He spit on the passenger side floor. "American masturbation." He did another gesture at his dashboard.
"Ha. Someone said that jazz is five guys playing five different songs at the same time."
I would say deal me in for the next outing, but I'm already on it.
4 from 5