Robert Wright Campbell was one of my first crime/mystery author discoveries back in the late 80s. 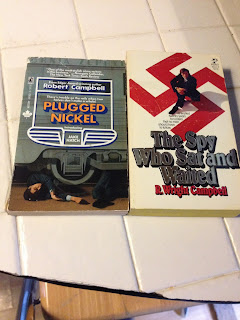 He had a series of Jimmy Flannery books that were published in the UK. Flannery was a sewer inspector, but also part of the local political machine in Chicago. Each of the books featured an animal in the title.....Dog, Gorilla, Ducks, Alligators - 11 in total between 1986 and 1998.

Another series set in LA or La-La Land - 4 books featuring Whistler were interspersed with the Flannery books, as well as two with a railroad inspector - Jake Hatch.

I think one of my favourites of his was the standalone novel Juice released in 1990, though I can't for the life of me remember what it's about. A hike up to the attic and tub 30 could soon tell me but CBA! 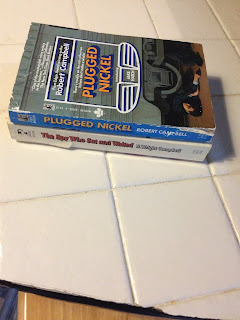 With Juice, Campbell breaks out with his first non-series crime title, sure to be his biggest hit yet. Juice is a rollercoaster of a story that pulses with energy, suspense, and a healthy dose of offbeat humor. "Full of good-time crime and a pleasure to read".--Elmore Leonard.

Campbell was also a screenwriter and was the brother of William an actor in film and TV during the 50s and 60s and into the 70s.

He had penned nearly 30 books by then. The Junkyard Dog won an Edgar and an Anthony Award. The Spy Who Sat and Waited - his debut novel was nominated for the National Book Award for Paperback Mystery in 1975. 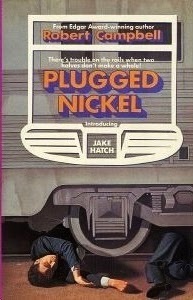 The night was pitch black, filled with driving rain when the California Zephyr jolted to a stop outside McCook, Nebraska. Somebody pulled the emergency brake, catapulting Jake Hatch out of the train – onto a severed corpse. He stumbled over the trousered bottom half. Someone else found the torso, neatly divided at the belt.

It was Hatch’s job to piece together the truth. All he had to go on was a book of sonnets and a money clip in one pocket, and three cigarette butts and a lipsticked handkerchief in the other. And a plugged nickel, now hidden in his own pocket – leading him to a criminal mastermind, a case of espionage, and an almost perfect murder.

Out of the Ashes

At the end of World War 1, a secret communique went out to German spies throughout the world; Maintain your cover and wait for orders. Will Oerter waited in Scotland. He fell in love. He began a family. But he never forgot.

Then orders came. Missions. Beatings. Kidnapping. The chance for Oerter to become a Nazi hero – and the terrible duty of destroying his own world. The wait was over. The ultimate betrayal had begun.