It’s week 21 of the Crime Fiction Alphabet journey hosted by Kerrie at the Mysteries in Paradise blog. It would be fair to say my shelves aren't brimming with U’s and that without resorting to some recent book buying, I wouldn't have particularly much to write or enthuse about. 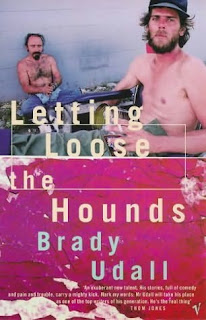 I read this short story collection, originally published in 1997, a couple of years ago and to be truthful can’t recall very much about it. I probably purchased the book on the basis of the cover – who wouldn’t to know more about those guys?  Udall has had a couple of novels published, one of which – The Miracle Life of Edgar Mint – sits unread on the shelves also. One of these years.....

Set in the small towns of Utah and Arizona, most of the stories in this collection deal with letting loose - or wanting to - in all its forms. Even when disaster looms in the tales, Udall's sense of the comic sustains his men and women in their sometimes extravagant efforts to connect and cope. 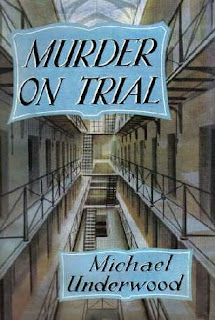 This is a recent addition and Underwood’s first novel, which features Simon Manton. Underwood was a barrister and most of his books have a setting in the legal profession. Manton features in about 12 or 13 books from 1954 up until the mid-60’s. Underwood authored nearly 50 books up until his death in the early 90’s. I’m fairly sure that I used to see his books when browsing my local library’s shelves as a teenager, I don’t reckon I ever took the plunge then, but he’s worth a look now. My copy is a plain hardback without dust-jacket and isn't particularly photogenic.

Her name is Maisie Jenks and that's her father with her. They live up in St. John's Wood way, and she knows who the murderer is . . .'

William Tarrant is on trial for the murder of a police constable. Before he can give evidence in his own defence, however, he is shot in Court 1 of the Old Bailey.

In his debut case, Detective-Inspector Simon Manton has to solve the puzzle of a missing juror, a nervous warder, and a girl, Maisie, who screams just before the deadly shot is fired . . .

Bought last month in preparation for this week’s alphabet entry, The Bait won the author an Edgar in the late 60’s. She followed this with 2 more concerning Christie Opara and about 6 or 7 standalone cop books. This will probably be the first one on this list of U’s to see daylight. 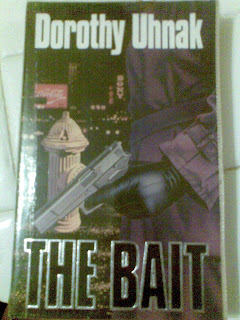 In this Edgar Award - winning debut novel, a dedicated cop becomes the ultimate prey when a serial killer gets out on bail

It begins when New York Police Department Detective Second-Grade Christie Opara arrests a man on the subway for indecent exposure. Within hours, Murray Rogoff, a burly giant, his crazed stare concealed behind thick glasses, is out on bail.

Soon after, the body of a young dancer is found stashed behind the stairway of a Bronx apartment building. The girl was brutally raped and strangled, and a clue links her with two previous murders.
The killer takes a signature trophy: a hacked-off lock of the victim's hair. A few days later, Christie starts to get strange, late-night phone calls. Although Rogoff never spoke when he was in lock-up, the detective's instincts tell her that Rogoff's the serial killer they're hunting. With the reluctant approval of her boss, Assistant District Attorney Casey Reardon, Christie prepares to become the bait of a deadly psychopath. 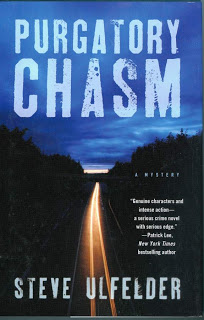 The first in a recent 3 book series featuring Conway Sax. Hopefully I enjoy it when I get to it, but I’m in 2 minds about liking it too much, because I know I will have to chase after the other 2 he’s followed up with. The OCD in me wouldn’t have it any other way!

'Tander Phigg was an asshole, but he was also a Barnburner. Barnburners saved my life. I help them when I can. No exceptions.'

The job seems simple. Conway Sax, a no-nonsense auto mechanic with a knack for solving difficult problems, has never liked obnoxious blowhard Tander Phigg. But a promise is a promise. Tander's a Barnburner, a member of the unique Alcoholics Anonymous group that rescued Conway, and when a Barnburner has a problem, Conway takes care of it. Besides, all Tander wants is to get back his baby, a vintage Mercedes that's been in a shady auto shop far too long.

But Conway soon discovers there's much more to the problem than Tander first let on - especially when Tander turns up dead. Conway was the last person seen with the victim, and on top of that, he has a record, making him the cops' top suspect. He must catch the killer to clear himself, but beyond that, he's a man who honors his promises, even when the guy he made them to is dead.

In the tradition of Robert B. Parker and Dennis Lehane, Steve Ulfelder's crackling debut mystery features a gritty, razor-sharp new voice in crime fiction. Conway Sax isn't a hired gun or a wise-cracking urbanite. He's just a mechanic trying to make his way, a blue-collar guy whose ideas about family and loyalty are as deeply held as they are strong. He'll break your heart if you're not careful. 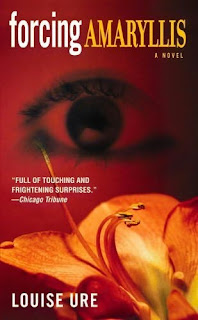 I hope it’s noted by some readers that when bolstering the ranks of the U’s I selected 3 female authors to sample and try! This won a Shamus Award for best first novel. She’s written a couple more subsequent to this, but I’m sticking on 1 for now.

From a gripping new author comes the haunting story of Calla Gentry, a trial consultant determined to discover the truth about her sister's brutal rape. A trial consultant in Tucson, Arizona, Calla Gentry devotes her time and energy to victims in civil cases rather than criminal trials. The rape and near murder of her sister Amaryllis has done much more than affect Calla's career; she hides behind locked doors and jumps at shadows, a veritable victim by proxy after Amaryllis is left in a coma following a failed suicide attempt. When Calla is assigned against her will to the trial of Raymond Cates, a wealthy landowner's son accused of rape and first degree murder, she cannot help but note the parallels between the crime he stands accused of and her sister's assault. Determined to uncover the truth, Calla begins an investigation of Cates and the events of that fateful night. But things are seldom what they seem-and her investigation leads Calla to buried lies and a whole new world of violent rage.

Cathi Unsworth – The Not Knowing

Unsworth’s debut has received praise from James Sallis among others. She’s a music journalist turned novelist with 4 books out to date. This is her debut.

London, March 1992. Nearly a year after the release of Brit noir sensation, Bent, the capital is still in the grip of its cultural and stylistic impact. Diana Kemp, journalist on the alternative arts magazine Lux, is dismissive of the film's cult following but admires the technique of its debut director, Jon Jackson. In fact, some of her admiration has a more personal nature and when Jon disappears following a triumphant Guardian lecture, she feels the loss, acutely. Two weeks' later, Jackson's body is found in a condemned lock-up in the arches behind Camden market. A victim of his own success? Perhaps - the murder site resembles the particularly bloody final scene of Bent. But why would anyone want to destroy the golden boy in such a way? Attempting to put a lid on the past, Diana buries herself in work. But an assignment, at the ICA's Crimewave festival, leads her on a voyage of discovery where not knowing might be the only thing that saves her.

A bit of a sparse entry to be honest and rest assured it won’t be alone in this regard with the few weeks ahead of us on this journey through the alphabet.

Back next week with the V’s.

You can see other bloggers selections for this week here and no doubt pick up some more recommendations for your book mountains.