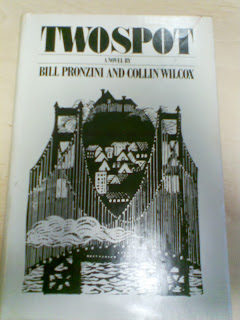 I’ve read a couple of novels that were collaborations, most recently the Hard Case Crime series starring Max, co-authored by Jason Starr and Ken Bruen. Going back further, there was The Talisman by Stephen King and Peter Straub and coming forward again a PJ Tracy novel which is apparently a mother/daughter writing duo. What these all have in common is that I’m ignorant of which author wrote which bit. This time with Twospot there is probably more clarity as to which author provided which section of the novel. There are chapters devoted to Nameless that are written from his point of view and chapters from Wilcox providing a perspective of the investigation from Hastings. (I say this claiming certainty, but I guess they could have had some fun and changed things up.)

This is the fifth outing for Pronzini’s Nameless detective and it also introduced me to Collin Wilcox and his cop, Frank Hastings. Prior to this I was ignorant of both Wilcox and Hastings, but there is a 19 book series starring the detective. These were published between 1969 and 1995, with the last appearing a year before the author’s death.  Twospot dates back to the late 70’s. One interesting thing for me was Hastings referral to Nameless throughout the book as Bill. Throughout the 40 book series, the author never ascribes his detective a moniker, so it was fun to see Willcox do it for him.

We open with Nameless engaged by Alex Cappelani to investigate his mother’s latest companion. Alex is suspicious of Jason Booker’s motives and is certain he is trying to worm his way into her affections and gain a stake in the family business. Nameless visits Alex at their vineyard, arriving just after Alex has been attacked and rendered unconscious. Nameless himself is attacked and gives chase, but eventually loses his man. When Alex recovers and his suspicions about Booker are confirmed, Nameless is asked by Capellani to meet him so he can confront the boyfriend. Nameless shows up, Alex doesn’t and when our PI inspects the property he finds Booker dead. This is when we meet Willcox’s detective, Frank Hastings.

Hastings and his team start investigating the murder, whilst Nameless fades into the background. Until there is a second attempt on Alex’s life and he is engaged by the matriarch of the family to adopt a bodyguard role for Alex.  With some disgruntled employees and some sibling rivalry in the mix Hastings and Nameless work from opposite ends to resolve the mystery. There’s an interesting twist which shows us, that all is not as it seems.

I enjoyed this outing and it was interesting to see Nameless share the limelight with another author’s well established detective. Probably not my favourite of the 5 in the series that I have read so far, but far from a waste of time. Hastings shares many of the same characteristics of Nameless......honesty, decency, a desire to ensure justice is served and there’s a mutual respect between the two detectives which was to be expected. Nameless in this book, also seems less obsessed with his health having established that his troubling lung lesions are benign; for now at least.

My other 4 reviews are here;
The Snatch
The Vanished
Undercurrent
Blowback

I will be continuing my journey with Nameless and look forward to the next in the series. To be honest, I’m probably not going to revisit Willcox and Hastings unless the book fairy deposits some of his case files on my doorstep as a gift. It’s not that I didn’t enjoy meeting Frank, there’s just too much other stuff both new and old already waiting.

I obtained my copy second hand recently from Amazon.