LEIF G.W. PERSSON - LINDA, AS IN THE LINDA MURDER 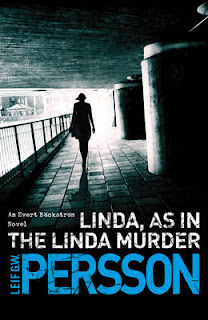 In the middle of an unusually hot Swedish summer, a young woman studying at the Vaxjo Police Academy is brutally murdered. Police Inspector Evert Backstrom is unwillingly drafted in from Stockholm to head up the investigation.

Egotistical, vain and utterly prejudiced against everything, Backstrom is a man who has no sense of duty or responsibility, thinks everyone with the exception of himself is an imbecile and is only really capable of warm feelings towards his pet goldfish and the nearest bottle of liquor. If they are to solve the case, his long suffering team must work around him, following the scant few leads which remain after Backstrom's intransigence has let the trail go cold.

Blackly comic, thrillingly compelling and utterly real, Linda, As in the Linda Murder is the novel which introduces the reader to the modern masterpiece that is Evert Backstrom, a man described by his creator as 'short, fat and primitive'. He is, without doubt, the real deal when it comes to modern policing.

This was my third Persson book this year and after reading the 490 pages and finally finishing, my reaction was similar to that felt at the conclusion of the previous two...........interesting, enjoyable, entertaining, intriguing, educational and humorous – all positives, but offset frequently by spells of writing that were for me.......frustrating, dull, superfluous and infuriating.

We start with the murder initially investigated by the local police, but soon after the NCP are called in. The team is headed by Evert Backstrom, a character I have previously encountered in Persson’s earlier books. Backstrom with his barely disguised disdain for the locals sees the murder case as an opportunity to milk overtime, fiddle his expenses, get caught up on his laundry and kick back and enjoy a few beers after a hard day masterminding the investigation. Oh and if we can enjoy a bit of late night porn, whilst patiently waiting for our journalist contact to warm to the thought of a portion of Backstrom “super salami”, all the better. Backstrom, never one for self-doubt seems oblivious to the regard in which his colleagues have for him. If I had a minor niggle with Persson’s portrayal it would be in questioning whether someone so blatantly racist, sexist, homophobic, corrupt, incompetent and yes, funny at least to the reader, could be in a position of responsibility within the police service. Though perhaps the frequent mentions of his union, may explain his continued employment.

Persson excels at portraying the minute detail of an investigation where with no obvious suspect for the murder, police have to painstakingly build a portrait of Linda’s life and of those close to her, whilst hoping to catch a break. When a Polish neighbour, briefly becomes a person of interest, Backstrom is all too ready to grab the glory. When eliminated, oh well time for another drink.  The investigation soon seems to focus on obtaining DNA samples from every male in the locale in the hope of a match to the physical evidence left at the scene. Eventually, some old-fashioned detective work, by Lewin, one of the NCP team, breaks the case and a resolution is achieved.

Persson re-introduces a couple of his characters from his previous books, Johansson and Holt. Both fully functioning, well-rounded officers one of whom endeavours to befriend the suspect and obtain reasons and a rationale for the murder. The other, Johansson, heads the department and as Backstrom’s boss, gets to call him to task for his previous actions.

Overall, very good but I can’t help feeling that the book would have been enhanced by a little bit more judicious editing. Did I constantly need to re-live Lewin’s dreams of his childhood and his father teaching him to ride a bike? No and if there was a greater significance attached to these scenes, I’m afraid they eluded me.

I did enjoy the pedestrian pace of the investigation, where it often seemed as if no headway was being made. It made the book more realistic. Similarly, I liked the supporting cast of officers, diligent and decent in the main, though in truth Backstrom stole the show!

4 stars from 5, because yet again Persson managed to irritate and frustrate me, albeit in much smaller measures than the upsides.

October sees the release of his fourth translated book, He Who Kills The Dragon. I have already placed a copy on reserve at the library. Apparently it’s 90 pages shorter than this, so shouldn’t prove too daunting when I meet up again with the fat, primitive Evert Backstrom later this year.

There's a couple of other reviews to be around the town, one from Sarah at Crimepieces that introduced me to this author, thanks. Another at Eurocrime.

These are my thoughts on the two earlier books that I have read by Persson.
Between Summer's Longing And Winter's End
Another Time Another Life

I obtained my copy a month or two ago on E-bay.