This is week 19 and the turn of the S – authors to hit the spotlight on our Crime Fiction Alphabet Journey.

If you visit Mysteries in Paradise website, Kerrie has been kindly collating everyone else’s contribution to the journey here.

I have probably too much choice on my shelves this week.  Some of the authors who have been over-looked and fail to make the line-up include....Gerald Seymour, Mark SaFranko, Anthony Neil Smith, Lawrence Shames, Doug Swanson, Zoe Sharp, Dan Simmons..... mentioning, but a few. 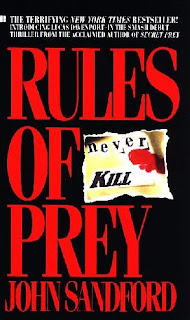 I vaguely remember buying this in hardback when it was first published in the UK, which would have been sometime either 1989 or 1990. Read it and loved it and was delighted when he followed it up the following year with Shadow Prey. Fast forward to 2013 and Lucas Davenport figures in the 23rd Prey book – Silken Prey. At some point in the mid or late 90’s with the arrival of the Keane family’s next generation – 3 in 3 and a half years, I sort of fell out of love with reading....no time, constantly working and juggling home life with everything else that was happening...at this point I lost track of the series and  author. I have a lot of the books, probably not all, but my mission at some point will be to see read through start to finish. I’m interested to see if Davenport changes through the passage of nearly 25 years.  The author has a couple of other series which I have dipped in and out of and would also like to read more of Kidd and LuEllen and more latterly Virgil Flowers.

The murderer was intelligent. He was a member of the bar. He derived rules based on professional examination of actual cases: Never kill anyone you know. Never have a motive. Never follow a discernible pattern. Never carry a weapon after it has been used. Beware of leaving physical evidence. There were more. He built them into a challenge. He was mad, of course . . .
The killer's name is Louis Vullion, a low-key young attorney who, under the camouflage of normalcy, researches his next female victim until the pressure within him forces him to reach out and "collect" her. Plying his secret craft with the tactics of a games master, he has gripped the Twin Cities in a storm of terror more fierce than any Minnesota winter.
It is after the third murder that Lucas Davenport is called in. It is the opinion of his colleagues that everything about the lieutenant is a little different, and they are right — in the computer games he invents and sells, in the Porsche he drives to work, in the quality of the women he attracts, in his single-minded pursuit of justice. The only member of the department's Office of Special Intelligence, Davenport prefers to work alone, parallel with Homicide, and there is something about this serial killer that he quickly understands. The man who signs himself "maddog" in taunting notes to the police is no textbook sociopath; he has a perverse playfulness that makes him kill for the sheer contest of it. He is a player.
Which means that Davenport will have to put all his mental strength — and physical courage — on the line to learn to think like the killer. For the only way to beat the maddog is at his own hellish game. . . 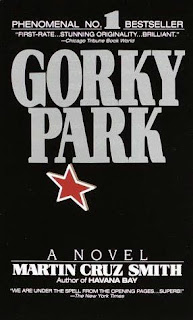 I’m unsure when I first read this, probably not 1981 but I don’t know. I was still a spotty teenager, probably more interested in football than books in the early 80’s. This period of my life, as does the USSR of Leonid Brezhnev seems a lifetime ago. I read this and its follow on Polar Star and loved both. The author has continued to write about Renko on and off over the years. Tatiana the eighth is out later this year.

Gorky Park is a 1981 crime novel written by Martin Cruz Smith set in the Soviet Union. It follows Arkady Renko, a chief investigator for the Militsiya, who is assigned to a case involving three corpses found in Gorky Park, an amusement park in Moscow, who have had their faces and fingertips cut off by the murderer to prevent identification. 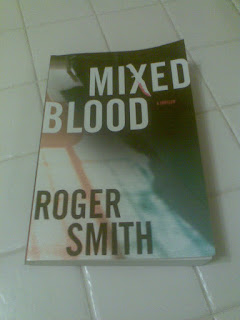 Roger Smith only appeared on my radar late last year. I was shopping with my wife on my birthday in October and chose Dust Devils as a suitable present for my own good self. I still haven’t read Dust Devils but after reading the back of it, was compelled to seek out his other stuff. Mixed Blood was a five-star read late last year for the Criminal Library. He has another book out soon, Sacrifices which will be welcome, but he either needs to slow down writing or I need to speed up my reading!

If you are unsure on whether to take the plunge on Smith’s violent modern day portrayal of South Africa, you could jump in with Ishmael Toffee – a short novella, which will give you a flavour.

Reluctant bank robber Jack Burn is on the run after a heist in the United States that left $3 million missing and one cop dead. Hiding out in Cape Town, South Africa, he is desperate to build a new life for his pregnant wife and young son. But on a tranquil evening in their new suburban neighbourhood they are the victims of a random gangland assault that changes everything. Benny Mongrel, an ex-con night watchman guarding a building site next to Burn's home, is another man desperate to escape his past. After years in the ghetto gangs of Cape Town he knows who went into Burn's house, and what the American did to them. He also knows his only chance to save his own brown skin is to forget what he saw. Burn's actions on that night trap them both in a cat-and-mouse game with Rudi 'Gatsby' Barnard - a corrupt Afrikaner cop who loves killing almost as much as he loves Jesus Christ and Disaster Zondi, a fastidious Zulu detective who wishes to settle an old score. Once Gatsby smells those missing American millions, the four men are drawn into a web of murder and vengeance that builds to an unforgettable conclusion. 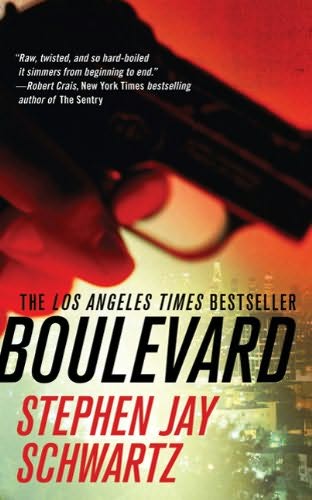 I’m unsure of the how or the when I came across this author, probably only a year or two ago, but this and his second book, Beat also featuring Hayden Glass intrigued me. I don’t suppose I will get to this soon, but it’s reassuring knowing that it’s safely shelved and waiting for me.

Stephen Schwarz's intensely nonstop thriller is about a LAPD homicide detective who must find a killer responsible for a series of murders that are directly related to him. Los Angeles Police Department homicide detective and former vice cop Hayden Glass is a sex addict. The addiction has ruined his marriage and irreparably damaged many of his relationships. However, he has always been able to separate his behaviour from his career. But, when a series of killings in the L. A. area seem to be meant as a sign just for him, his addiction threatens to ruin both his professional career and his life.

"Raw, twisted, and so hard-boiled it simmers from beginning to end." – Robert Crais 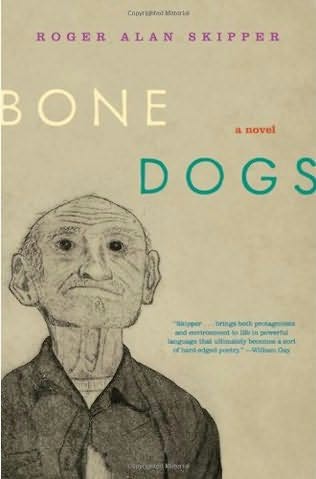 I was probably sucked in by the cover for this one, though a recommendation by William Gay another author on my book shelves would have helped. I think I got this at some point late 2011 or maybe even early last year, so it isn’t too dusty yet. He has written other stuff, but for once I have exercised restraint and held off from buying anything else by him until I see how Skipper’s Bone Dogs goes.

I think I should maybe extend that mantra to all authors – don’t buy anything new from an author, unless I have read all their other books on my shelves.....yeah right, like that is going to happen!

A pound to a penny, when I start reading this, my kid's take the mickey and claim it's me in 10 years-time!


Tuesday Price is a wiseass, a boozer, and a loser. Only his wife Linda recalls a smarter, better man, and she's losing faith in that man's return. When Tuesday befriends a strange, silent Vietnam vet who eternally sits with a cooler of beer in a disabled pickup, Linda's had enough. At her departure, Tuesday is left with only his new friend as a companion - until the old vet is found dead, and Tuesday is blamed. Alone and haunted by regret, Tuesday's daily life deteriorates until he must unearth his sordid past to reach a worthwhile future. But his past is a tangle of murder, deceit, and abandonment for which his only punishment has been self-inflicted. In order to reclaim all that has been lost, he returns to his deserted childhood home and, with hammer and nails, rebuilds the sagging structure, reassembling a history quite different than the one he'd believed while finding the future not at all what he'd expected.
"Skipper... brings both protagonists and environment to life in powerful language that ultimately becomes a sort of hard-edged poetry." – William Gay 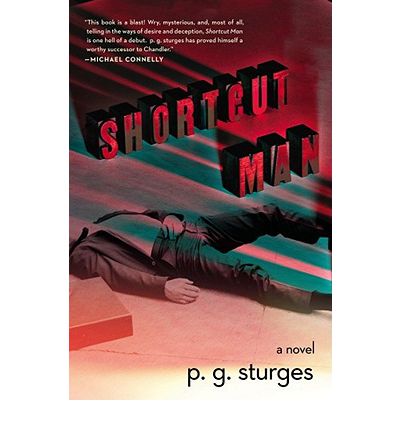 This author is a fairly recent addition to my shelves and another new author for me, courtesy of a friend of mine from over at Goodreads who recommended him. P.G. is the son of Preston Sturges, a famous American playwright, screenwriter and film director. Sturges Jr. has to date written 3 in the Shortcut Man series and I have the lot, waiting for a window in the calendar to get stuck in and hopefully enjoy. They look like my kind of book.

Recommended or blurbed by Michael Connelly

In the best tradition of James Ellroy and Elmore Leonard, P.G. Sturges has written a smart and entertaining crime novel set in the underbelly of Los Angeles, with a cast of characters that runs the gamut from saints to sinners. In the center of it all is Dick Henry, a "shortcut man," who cuts through red tape for his clients, whether it be an elderly woman ripped off by shady contractors, or a landlord with a pesky tenant many months behind on the rent. Sturges's characters live in a world where right and wrong is a fine line, a line often crossed by our hero, Dick Henry, who knows that the shortest answer to many problems may not always be legal.

Back next week with some T's!