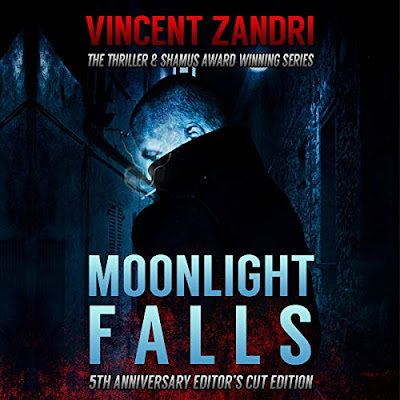 Synopsis/blurb ....
Did Moonlight murder his own lover? Or has he been set up to take a fall of biblical proportions?
Some years ago, Moonlight Falls, the first novel in what would become the 2015 Thriller Award- and Shamus Award-winning best-selling hard-boiled detective series was first introduced to the world. Since then, seven Dick Moonlight noir private detective novels have been released to great acclaim. But now, for the first time ever, a longer, grittier, sexier, more dangerous, more romantic version of the original pilot episode is available. It represents the author's original dark vision and the desperate, if not paranoid state of mind he was in when writing it.
In Moonlight Falls, best-selling author Vincent Zandri asks the question, "If you knew your life could end at any moment, how far would you go to prove you murdered your lover? " Albany, New York, is the dark setting of this paranoid thriller about Richard "Dick" Moonlight, former APD detective turned private investigator, who believes he killed Scarlet Montana - his illicit lover and wife of his ex-boss, Chief of Detectives Jake Montana. Problem is, despite the blood on his hands, Moonlight doesn't remember what happened!
For fans of best-selling noir, hard-boiled mystery, and romantic suspense writers like Robert B. Parker, Michael Connelly, Lawrence Block, Don Winslow, and Charlie Huston.
My second outing with Zandri's Dick Moonlight and while I liked it well enough. It did just seem to go on and on and on, subjecting us to every thought and deed the main character had. This version, as it says in the synopsis above is the author's original vision for the book. Despite not having read the original publication (I have it somewhere) I would definitely prefer the pared down offering.
Decent set-up to the story. We get to hear about Moonlight's past and his brain problem - self-inflicted and soon we're are off and running (alright maybe a leisurely stroll) as Dick's secret lover is killed (or suicide?) and Moonlight is asked to investigate (but not really) and sign off on the death for the Albany cops. Cops who might have some other issues to hide - connections with the Russian mob and who might see Moonlight as a patsy for murder, should it be necessary.
Interesting main character. He's funny and likable. He has some good friends prepared to break the law/bend the rules to help him out. We have conflict with the police and some mobsters. We have tension with the ex-wife and her cop husband. Lots of action, interspersed with a bit too much naval gazing.
More to like than dislike. I enjoyed the narration and I liked the humour in the book. The story itself just had a bit too much padding. 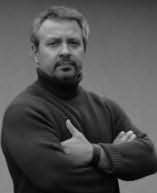