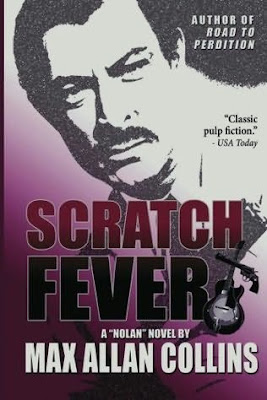 Return of a femme fatale. Beautiful, homicidal Julie has one lethal solution for every problem. And now Nolan and his sometime sidekick Jon have gotten on Julie's "problem" list. If a pair of out-of-town hitmen can't do the job, Julie will do it herself. Said the Cleveland Plain Dealer: "For fans of the hardboiled crime novel...this is powerful and highly enjoyable reading, fast moving and very, very tough." Now six of Max Allan Collins's early Nolan novels are back in print, with new Introductions by the author. 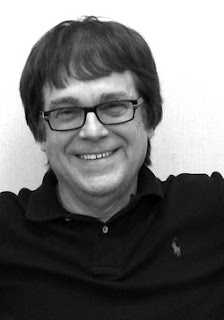 Book 6 in the Nolan series of 8 from
Max Allan Collins, and another enjoyable outing.

Most of the time we are in the company of Jon, Nolan’s young sidekick. Jon’s playing in a band and has a casual on-off sex thing with the other lead singer – Toni. The band are popular on the local circuit, but are playing their last gig before splitting – musical differences apparently - Jon’s cohorts being metal-heads. I found this start to the novel interesting and a bit of a change from other entries in the series. Collins explains in his introduction, that back in the day he was a gigging musician. You could tell he has a real passion for music.

Moving on. From the stage Jon think he spots an unwelcome face from the past (and an earlier Nolan book). Julie was the back-stabbing psycho bitch who tried to kill both Jon and Nolan before absconding with the proceeds from their insider-led bank job. Jon isn’t too sure, but when he goes into the crowd to investigate his target has vanished.

Julie is herself having a likewise moment of deja-vous and when her suspicions get confirmed. She instigates Jon’s kidnapping with the sole purpose of keeping the relentless Nolan off her back and keeping all the loot from the bank robbery. Information drawn from Jon under duress, allows her the opportunity to sic a couple of “Family” hitmen onto Nolan with the express purpose of taking him off the board permanently.

Unbeknownst to Julie, Jon and his on-off girlfriend – Toni – get a message through to Nolan before he is snatched. Nolan – out of town on business – arrives home to find his dog dead, his girlfriend being tied up and threatened and two Mafia hitmen to deal with.

An angry man when roused, Nolan deals with the situation. Deciphering Jon’s cryptic phone message he heads after his protégé knowing something is amiss, but unsure what.

Teaming up with Jon’s on-off f-buddy Toni, he’s soon on Julie’s coat-tails. In the author’s capable hands we get an interesting and somewhat bloody resolution.

Another belter and time well spent in the company of one of my favourite series crims.

In October I’ll be reading the penultimate Nolan novel – Spree.

Scratch Fever was bought a couple of years ago for Kindle.
Posted by col2910 at 08:27