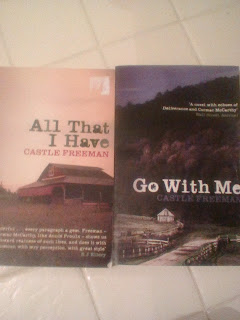 I can’t for the life of me recall how I discovered this as yet unread author. Most likely hopping around on the net , a bit like six degrees of separation, I look up one book or author that has grabbed my attention, which then diverts me someplace else and a few tangential clicks later, before you know it, you have one eye on the postman the following day hoping he’s got a book parcel for you.

Castle Freeman Jr. has written a couple of earlier books, but for once I will hold my fire until I see how I go with these. I do also have a collection of short stories from him called Round Mountain. 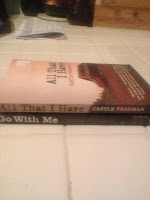 Freeman was born in Texas and raised and schooled in Illinois, but his latter fiction at least is set in Vermont, so I will probably claim one of these books for my Vermont State fiction book, when I eventually kick-off my 2014 USA State Reading quest.

Freeman says on his website........."Practically all the writing I have done—fiction, essays, history, journalism, and more—has been in one way or another about rural northern New England, in particular the State of Vermont, and the lives of its inhabitants, a source of unique and undiminishing interest, at least to me."

A young woman recently relocated to a tiny Vermont logging town, Lillian is menaced by a mysterious stalker named Blackway. This one man - who kills her cat, forces her boyfriend to flee the state in terror, and silently threatens her very existence - is a force little understood by the local figures to whom she turns for help. Yet, in this spare and powerful tale, Lillian enlists the powerful brute Nate and the curmudgeonly Lester to take the fight to her tormenter as a raggedy quartet of town elders ponders her likely fate. With simple strength and extraordinary force, Go with Me is a riveting modern fable of good provoked to resist evil.

Go With Me is “a small masterpiece of black comedy and suspense about a trio of backwoods heroes who embark upon a modern-day quest. . . . If all novels were this good, Americans would read more.” KIRKUS REVIEW

ALL THAT I HAVE 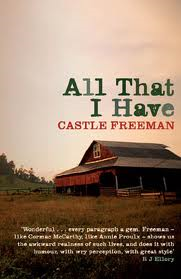 In this gripping, wise, and darkly funny tale of suspense, Sheriff Lucian Wing confronts a series of trials that test his work, his marriage, and the settled order of his life.

Wing is an experienced, practical man who enforces the law in his corner of Vermont with a steady hand and a generous tolerance. Things are not as they should be, however, in the sheriff's small, protected domain. The outside world draws near, and threats multiply: the arrival in the district of a band of exotic, major league criminals; an ambitious and aggressive deputy; the self-destructive exploits of a local bad boy; Wing's discovery of a domestic crisis. The sheriff's response to these diverse challenges calls on all the personal resources he has cultivated during his working life: patience, tact, and (especially) humor.

2 more next week if I haven’t decided to have a week off and gorge myself silly over the festive period!