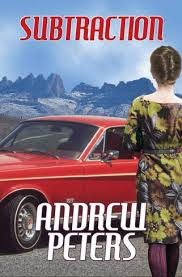 Mark Paris is pretty much an ex. Ex-boxer, ex-soldier, ex-mathematician, ex-husband. Now he passes the time winning small in casinos and offering assistance to people who can't find it anywhere else. He calls himself The Professor, much to the amusement of local criminals and barmen, and the contempt of the police.

An early phone-call from an acquaintance brings him his latest job, cleaning up after a sudden death, and at much the same time he's invited to help an elegant businesswoman with big trouble on her hands.

Can The Professor work out the right directions to head in, before his past catches up with him, or
the people who wish him ill manage to cut his equation off permanently?

Prior to a recent post of Paul D Brazil regarding this book by the author, Andrew Peters I had been unaware of either. Intrigued by Brazil’s praise for both, I contacted Mr Peters and he obligingly sent me a copy of his latest offering Subtraction.

Well how did we get on? I enjoyed it and found it well-written with an easy style of narrative that kept me turning the pages. Our main character, Mark Paris AKA The Professor was likeable and believable and his back story portrayed him as a sympathetic character to this reader at least.

Paris is a part-time gambler and small-time fixer in sixties Las Vegas.  An associate calls him for help after
waking up next to a dead hooker and Paris obliges, though it is obvious that all he’s done is bought his friend some time. Blackmail and an escalation are around the corner.

Next to come calling on the Professor is the sister-in-law of his girlfriend. She’s a Vegas madam whose string of girls are being targeted for attack by a couple of vicious thugs. Paris agrees to look into the matter and soon his involvement in both cases has him in jeopardy.  Our Prof has to manage the attentions of the LVPD as well as a psychopath before he fully understands his involvement. Regrettably for Paris, he has to turn back to his estranged family to help him fix the mess.

Overall Subtraction was an interesting book with a satisfying resolution. Peters sucked me into 60’s Vegas.
His depiction of the bars and restaurants, cabaret acts and casinos was the second best thing about the book, after the Professor himself.

I possibly didn't enjoy it quite as much as Paul, but it was off-beat and quirky enough for me to want to read more from Peters at a later date.